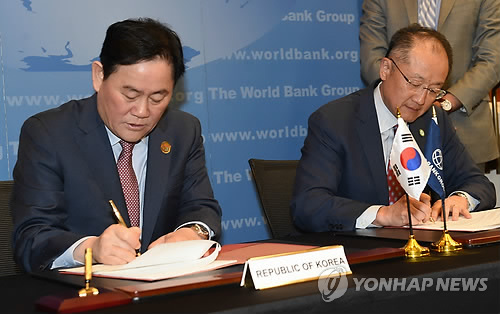 SEJONG, Apr. 16 (Korea Bizwire) — South Korea has pledged US$300 million to the World Bank for its program to build critical infrastructure in developing countries and deal with their environmental and energy issues, the government said Thursday.

The finance ministry said the memorandum of understanding (MOU) reached in Washington on Wednesday calls for the fund to be transferred in the next four years with the World Bank to provide matching sums of money.

Seoul’s contribution will come from its Economic Development Cooperation Fund (EDCF) launched in 1987 and meant to provide low-interest loans to less-developed countries.

The MOU reached during Finance Minister Choi Kyung-hwan’s visit to Washington is expected to help the international development organization push forward projects in Asia, Africa, Latin America and the Caribbean.

Choi, who doubles as deputy prime minister in charge of economic affairs, is in the United States to take part in the G20 ministerial meeting as well as the International Monetary Fund and World Bank meetings.’

The latest deal comes as South Korea marked its 60th year as a World Bank member, and can lay the foundation for closer ties down the road, the ministry said.

Besides the MOU, Choi and World Bank chief Jim Yong Kim touched on ways to generate funding for the Green Climate Fund (GCF) which aims to cope with global warming. The GCF is headquartered in Songdo, west of Seoul.

Choi and Kim concurred on the need to strengthen cooperation between the World Bank and the United Nations climate fund.

In talks with U.S. Treasury Secretary Jacob Lew, the South Korean policymaker agreed that closer cooperation between the two countries is needed in light of recent global economic developments and mounting uncertainties in the financial sector.

“The two men concurred on the importance of the bilateral military alliance and reached an understanding on strengthening economic and financial cooperation,” the ministry said.

The deputy prime minister, who is IDB’s rotating chairman this year, said Asia’s fourth-largest economy wants to increase its stake in the newly created NewCo, which is being set up by merging various public corporations under the multinational development bank into a single entity. The corporation will manage development projects and other ventures.

Since Seoul joined the IDB long after its creation, its stake in the lender and related organizations, which can determine its standing, has remained very small.

The ministry said South Korea wants to use the NewCo as a platform to expand its economic cooperation with Latin America.