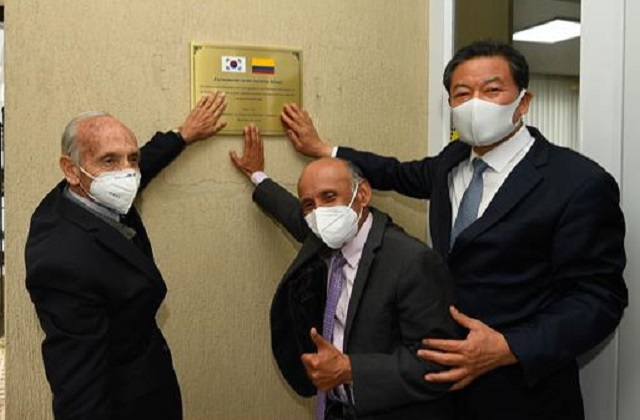 Veterans Affairs Minister Hwang Ki-chul (1st from R) poses for a photo after delivering an appreciation plaque to a group of 1950-53 Korean War veterans in Colombia on May 25, 2021, in this photo provided by his office.

SEOUL, May 27 (Korea Bizwire) — South Korea’s veterans affairs ministry said Thursday it has provided 10,000 additional face masks to Colombia to express gratitude for the country’s participation in the 1950-53 Korean War.

The masks were delivered Tuesday as Minister Hwang Ki-chul was in the Latin American country to strengthen the bilateral friendship and cooperation, according to the Ministry of Patriots and Veterans Affairs.

South Korea earlier delivered 140,000 face masks to Colombia to help the country cope with the new coronavirus pandemic, marking the 70th anniversary of the outbreak of the three-year conflict.

“Building on this Colombia visit, we will continue to push for various international projects for veterans to remember and pay tribute to their sacrifice and dedication,” Hwang said, wrapping up his three-day trip that began Monday.

Colombia was the only Latin American country to dispatch troops to the Korean War.

Around 5,100 Colombian soldiers fought in the war under the U.N. flag against the North Korean forces backed by the Soviet Union and China. The war left 213 Colombians dead and 448 wounded.