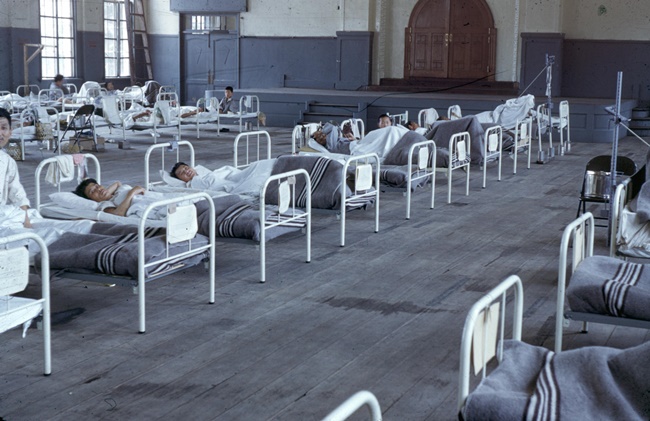 This undated photo provided by the Korean Embassy in Germany on April 13, 2016, shows a German Red Cross hospital in South Korea’s southern port city of Busan. According to Seoul government data, German medical workers treated around 300,000 patients in South Korea between April 1954 and March 1959.

SEOUL, Feb. 26 (Korea Bizwire) — The veterans affairs ministry published a new edition of its book on the history of the international medical assistance rendered to South Korea during the 1950-53 Korean War to add the long-forgotten contribution of Germany, officials said Sunday.

U.N. “Sending States” had long been defined as 21 countries — 16 nations that provided combat troops and five nations that sent medical teams. In June 2018, however, South Korea officially added Germany to the list for its medical aid in the post-war era.

“Last year, we launched a project to publish the latest version of our 2014 edition on the nations that extended medical assistance to include Germany’s role, along with India, Norway, Denmark, Sweden and Italy,” an official of the Ministry of Patriots and Veterans Affairs (MPVA) said.

Between April 1954 and March 1959, German medical workers treated around 300,000 patients in South Korea. But their contribution had not been recognized as they came here after the armistice agreement was signed in July 1953.

“Germany first expressed its intention to participate in the Korean War in April 1953. Given the fact, the Seoul government made the decision to add Germany to the Sending States list after reviewing opinions from the academic circle,” the official said.

This photo provided by the Ministry of Patriots and Veterans Affairs (MPVA) shows the cover of the newly published book on the history of six nations that provided medical assistance in the 1950-53 Korean War.

The new version has been published in three languages — Korean, English, and German — and Patriots and Veteran Affairs Minister Hwang Ki-chul plans to visit the German Embassy in Seoul and give a copy of the book to Ambassador Micheal Reiffenstuel, he added.

The book also marked the completion of the ministry’s publication project on the war-participating nations that began in 2004.

“We will continue to make utmost efforts to remember the sacrifice and the commitment of veterans and the international community,” the MPVA said.

Around 1.95 million people from 22 countries took part in the war, in which North Korean troops, backed by the Soviet Union, invaded the South. Of them, 37,902 were killed and 103,460 wounded, according to government data.