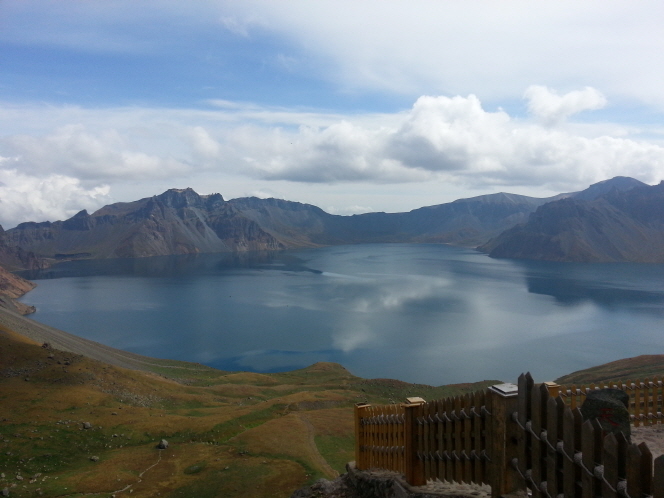 A crater lake called Chonji on the top of Mount Paekdu on the North Korean-Chinese border. (Yonhap)

The Korea Meteorological Administration has drawn up a medium- and long-term plan to establish a facility to observe volcanic activities on the mountain, together with North Korea, according to administration officials and Rep. Sol Hoon of the ruling Democratic Party.

The 2,744-meter-high mountain, the highest on the Korean Peninsula and considered a spiritual home of the Korean people, last erupted in 1903, historical records showed.

The plan calls for the two Koreas to establish a joint observation station equipped with devices to detect seismic movements around Paekdu and communications networks, as well as facilities to measure the magnetic field of the earth and analyze volcanic gas, the officials and Sol said.

“Discussions with North Korea have yet to begin, but the joint observatory project will be pushed if the conditions are met,” an administration official said.

An eruption of Mount Paekdu is expected to cause immediate damage from pyroclastic flows that contain lava, gravel and stones before triggering secondary damage from the spread of volcanic ash, experts say.