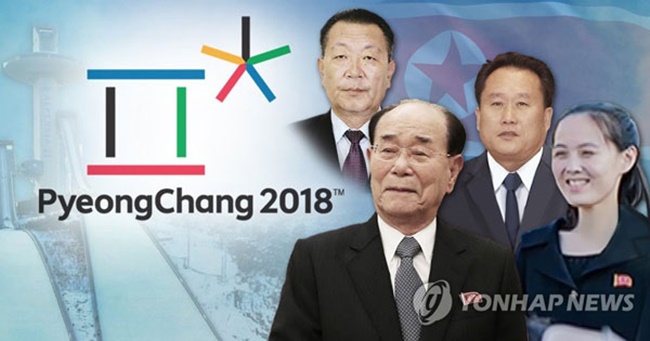 The move by the North to send the high-profile delegation this year is unprecedented, surpassing the delegation that attended the 2014 Asian Games held in Incheon in terms of the importance of its members. (Image: Yonhap)

North Korea’s de facto chief of state Kim Yong-nam is set to visit South Korea as part of the country’s Winter Olympics delegation, becoming one of the most prominent political figures to visit the South, along with Kim Yo-jong, the younger sister of North Korean leader Kim Jong-un.

The move by the North to send the high-profile delegation this year is unprecedented, surpassing the delegation that attended the 2014 Asian Games held in Incheon in terms of the importance of its members.

Experts argue that the delegation including some of the highest-ranking government officials reflects the regime’s understanding of the need for a change of direction amid heightening tensions and pressure from the international community over the development of weapons and missile tests.

Professor Kim Yeon-chul at Inje University, who previously served as Policy Advisor to the Unification Minister, says Pyongyang is feeling the heat.

“It’s not just South Korea, but the North also needs to de-escalate the situation. Amid mounting pressure and stronger sanctions that have isolated the country, it is likely that they felt the need to seek change,” Kim said.

With 26 high-ranking officials from 26 countries expected to visit South Korea during the Winter Olympics, Pyongyang seems determined to use the sporting event as an opportunity to escape the mounting pressure before losing longtime allies China and Russia.

With U.S. Vice-President Mike Pence and Japanese Prime Minister Shinzo Abe set to attend a reception held by South Korean President Moon Jae-in during the opening ceremony, the Olympics could provide a rare opportunity for the North to enter into dialogue with other countries.

Though sanctions won’t be eased, Kim says the regime can use the sporting event as a test bed for a change of direction.

“The delegation’s visit and dialogue between the two Koreas won’t change the situation on the Korean peninsula immediately. What is more important is that the government bring together not only the North, but the U.S., Japan and China, and create momentum for conversation about North Korea’s nuclear weapons,” Kim said.

Pyongyang has been accused of putting out a friendly image with cheering squads for the PyeongChang Olympics to deflect criticism leveled over its nuclear and missile tests.