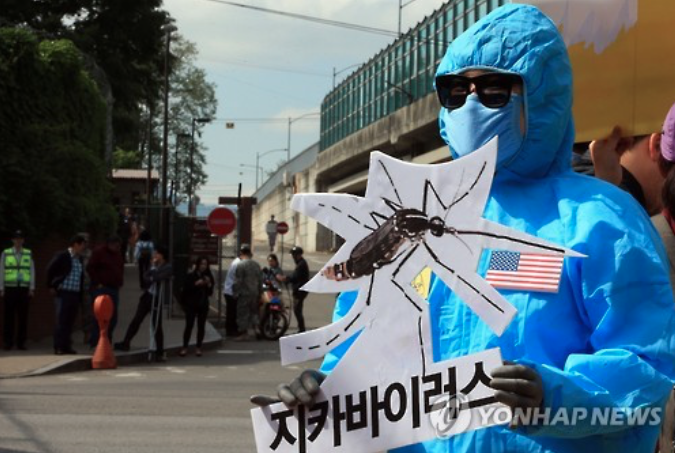 The photo shows an activst protesting against reports of the U.S. military’s alleged plan to conduct Zika virus detection tests at its Seoul base. (image: Yonhap)

The 43-year-old man developed such symptoms as fever, chill and eye pain about a week after returning from Brazil in March where he was bitten by a mosquito.

He is the first case of a Zika virus infection in South Korea imported from the South American nation.

The team – led by Oh Myoung-don, professor of internal medicine at Seoul National University College of Medicine – were able to extract the live Zika virus from his semen on the seventh day of his illness.

It adds to international studies suggesting Zika is transmissible through sex, not just mosquito bites and blood transfusions.

“These findings emphasize the importance of early detection of Zika virus patients and the application of preventive measures including abstaining from unprotected sex,” the team said in a paper carried by the Journal of Korean Medical Science.

The Zika virus is detected sometimes in urine or saliva. There has been no related transmission yet, though there are several cases of the virus found in semen in foreign countries.

It pointed out, however, that further study is needed on the duration of viable Zika virus in semen.

Earlier this week, the World Health Organization advised men to avoid unprotected sex for a full eight weeks after traveling to any country with a Zika outbreak.

“There is no other way to prevent infection via sex other than using a condom or abstaining from having sex,” Han Jeong-yul, a doctor at Cheil General Hospital & Women’s Healthcare Center, said.