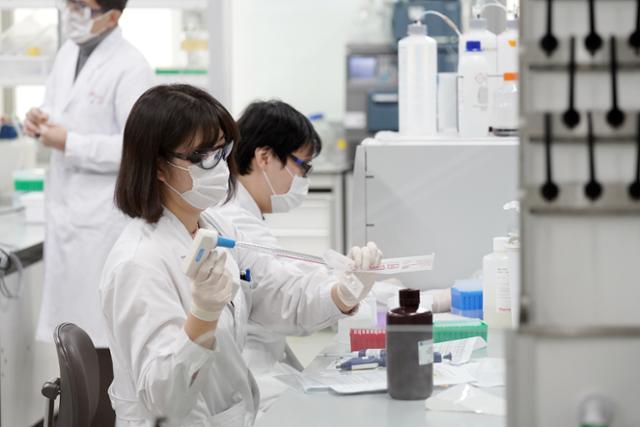 This photo shows a researcher of a pharmaceutical company in the city of Seongnam, Gyeonggi Province, conducting a test to develop new products. (Yonhap)

Invest Korea, the country’s investment promotion unit under the Korea Trade-Investment Promotion Agency (KOTRA), was chosen as the winner of the 2021 Investment Promotion Awards by the United Nations Conference on Trade and Development (UNCTAD), along with Costa Rica and the Netherlands, among 188 trade-related agencies across the globe, according to the KOTRA.

“Invest Korea was recognized for the wide-ranging coverage of the health sector on its virtual outreach channels, including online tools, sector guides and reports, information about investment opportunities, and incentives and databases on potential partners,” UNCTAD said in a press release.

The agency attracted foreign investment worth US$18.21 billion in healthcare and other sectors during the first nine months of this year in the midst of the new coronavirus by proactively launching promotion campaigns online, the KOTRA officials said.

It is the first time since 2007 that the KOTRA or its affiliated agencies received the U.N. award.

UNCTAD Secretary-General Rebeca Grynspan said South Korea, Costa Rica and the Netherlands “provide the best examples” in efforts to build resilience and preparedness to health crisis when the world is trying to recover from COVID-19 and its economic fallout, the release said.

The annual award recognizes and celebrates best performances of major investment promotion agencies in the world.