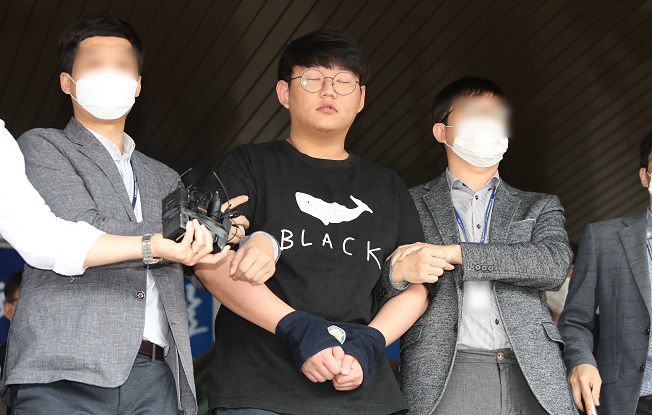 Moon Hyung-wook (C), a 24-year-old alleged mastermind of a high-profile digital sexual exploitation ring, appears before the press at the Andong Police Station in Andong, 270 kilometers southeast of Seoul, on May 18, 2020. (Yonhap)

The request for the suspect to spend the rest of his life behind bars — the first of its kind for an online sex criminal — indicates the seriousness of the crime: Moon Hyung-wook, 24, allegedly started the secretive Telegram chatrooms at the center of a major online sex exploitation case, known as “Nth Room Case,” that unsettled South Korea earlier this year.

The college student is accused of blackmailing about 50 victims, mostly high school students, into filming sexual and sometimes self-harming videos, and selling the videos online via 12 chatrooms, where more than 3,700 pieces of abusive content were shared.

He discouraged the young victims from seeking help by leaking their personal details, making them fearful of being exposed if they came forward.

He was arrested in May on 12 criminal charges, including violating the Act on the Protection of Children and Youth against Sex Offenses.

Although he opened the chat rooms in February last year, his predatory behavior began as early as June 2016, according to prosecutors.

Merely two years ago, the prosecution sought a 3-year prison term for Son Jong-woo, the founder and operator of Welcome To Video, a massive underworld child abuse site that ran on the dark web, inaccessible by regular web browsers.

The United States Department of Justice called it “the largest child sexual exploitation market by volume.”

People protest against a court decision not to extradite Son Jong-woo to the United States in July 10, 2020. (Yonhap)

In September last year, prosecutors requested a 2-year prison sentence for a man who inherited the Nth room from Moon. He subsequently got off with a sentence of 1-year in prison.

A 2017 report by the Korean Women’s Development Institute found that fines accounted for 38.5 percent of the punishment for criminals who produced and distributed explicit videos or images involving minors, followed by suspended sentences at 37.2 percent.

The Nth Room Case appears to have served as a wake-up call for the country’s judicial system, due to the severity of the sexual crimes committed against young children.

And many hope that law enforcement agencies and the judiciary will finally heed growing calls for stronger punishment for those who sexually abuse children.

Under pressure from increasing public outcry, Justice Minister Choo Mi-ae in March bowed her head and issued an apology.

“The Ministry has not fulfilled its responsibility to root out digital sex crimes that ruin the lives of the victims,” she said.

“I feel heavy-hearted to acknowledge that the ministry failed to listen to victims’ outcry for help and responded only half-heartedly.”

She vowed to respond sternly to heinous sex crimes, especially those against minors.

“The ministry will take a zero-tolerance approach toward the digital sexual exploitation virus infiltrating many parts of our society.” 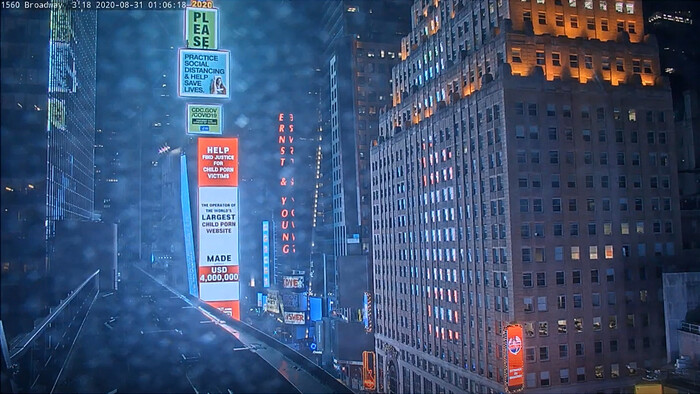 The image provided by a group called KEDO OUT shows a billboard set up in Times Square in New York on Aug. 31, 2020, criticizing a decision by a South Korean court to reject the request by the United States to extradite Son Jong-woo.

Since then, efforts, however belated, have been made to tackle the issue.

In April, the Supreme Prosecutor Office raised the maximum sentencing request to life imprisonment for a criminal who produces and spreads explicit imagery online.

In line with the movement, the Sentencing Commission, affiliated with the Supreme Court of Korea, recommended last month a court issue a tougher punishment of up to 29 years and three months in jail term for those convicted of such crimes.

It also laid out eight conditions for aggravated punishments, such as when victims take their own lives or suffer irreparable damage.

The aggravated punishments require jail terms of six to 27 years for selling such content; four to 18 years for distribution; and one year and six months to six years and nine months for purchasing.

Now, a court verdict for Moon is due to come out on Nov. 19 at the Andong branch of Daegu District Court.

All eyes will be on the ruling that many hope will speak louder than words.