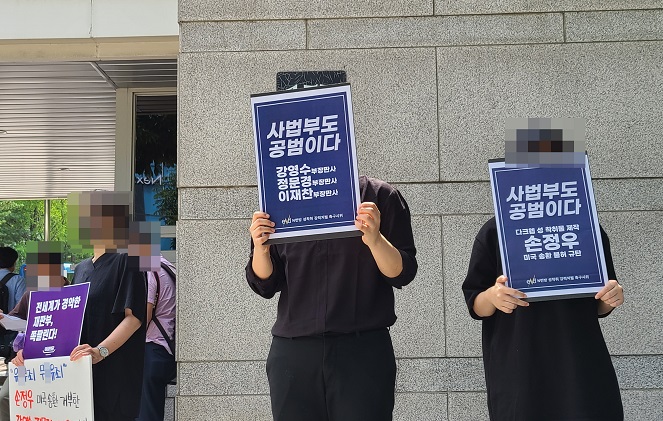 Civic activists protest against a court’s decision not to extradite Son Jong-woo to the United States in front of the Seoul High Court in Seoul on July 7, 2020. (Yonhap)

“The decision is neither right nor fair. There is no justice in the Republic of Korea,” one sign read, using the official name for South Korea.

“The judiciary is an accomplice,” read another.

On Monday, the Seoul High Court rejected the request from the United States to extradite Son Jong-woo, the operator of Welcome to Video, which is, according to the United States Department of Justice, “the largest child sexual exploitation market by volume.”

Various civic groups, columnists and woman rights activists, including a prominent incumbent prosecutor, all have joined in a growing backlash against what they see as a too lenient punishment for one of the country’s most serious sexual criminals against minors.

Son ran the site for several years until his arrest in March 2018 and made money by charging users fees in the cryptocurrency Bitcoin.

Law enforcement in S. Korea, the U.S., Germany and Britain worked together to chase down the site’s users.

The international investigation rounded up 337 people, including 223 Koreans, from nearly 20 countries. At least 23 underage victims abused by the site’s users were rescued.

He was indicted by a federal grand jury in the District of Columbia in the U.S. in August 2018 on nine counts for his operation of the massive child sexual exploitation site.

While some active users outside Korea were sentenced to up to 15 years in prison according to a New York Times report, Son was given a slap on the wrist in his native country.

The first court gave him a suspended sentence, taking into consideration his submission to the court letters of apology.

An appeals court sentenced him to 18 months in prison citing his “young age,” “unhappy childhood” and family dependent on him.

By rejecting the extradition request by the U.S., the court said having him here in the country would be helpful in its fight against child pornography.

“It is BS,” wrote prosecutor Seo Ji-hyun, one of the core figures who led the country’s #MeToo movement, in her angry Facebook post, a day after the decision.

“I was angry, sad, devastated, swore and cried, and repeated all that over and over again,” she wrote.

She said freeing him was not going to help Korean law enforcement in any way because Son served his time in jail and the police already closed his case on child pornography charges.

“The police wrapped up its investigation into the site, and there is no plan for an additional investigation,” she wrote.

“Only 43 people have been charged by the prosecution out of 217 users. Only Son was given a prison term.” 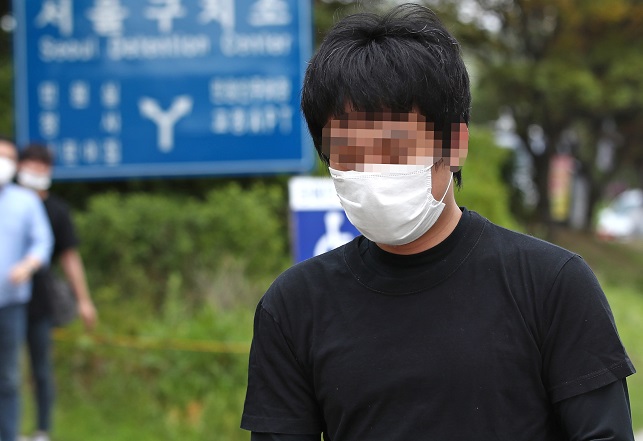 Son Jung-woo is released from the Seoul Detention Center in Uiwang, south of Seoul, about two hours after the Seoul High Court decided to reject his expatriation to the United States on July 6, 2020. (Yonhap)

A petition has been filed on the presidential Cheong Wa Dae website, a barometer of trending issues and public sentiment on them, asking it to strip the judge who made the extradition ruling of his qualification to become a Supreme Court judge. More than 450,000 people have joined the petition as of Friday.

Even a website called “Digital Prison” has been created in a show of public distrust in the country’s judiciary system.

“Because of the judiciary’s repeated soft punishments, criminals become more sophisticated and grow in audacity,” read the introduction of the website.

“We feel the limit in the country’s punishment for worst offenders and want them to face social judgment by disclosing their personal information.”

The apparently illegal site carries personal information and pictures of pedophiles, child abusers, murders and some judges deemed too generous toward heinous criminals.

In response to the growing public protest, the Ministry of Justice on Thursday issued a stronger statement than it did right after the ruling Monday, calling the decision “too bad” in that “a strict punishment for and the prevention of child sexual exploitation crimes ran aground.”

The ministry also vowed to act more sternly against sexual crimes against minors and will push ahead with a revision to the existing extradition law that does not allow an appeal.

On Monday it only said it “respects the court’s decision” in a short statement and that it will notify the U.S. of the decision.

In line with the social consensus on the need for tougher laws, the Supreme Court’s sentencing committee has been revising sentencing guidelines for online sexual crimes, including the production, distribution and downloading of sexually exploitative content.

“A strong punishment is not always the best solution, but society can’t be sustained without fair punishments (for such crimes),” said the Korean branch of ASSITEJ, the International Association of Theatre for Children and Young People, in a statement Thursday.

“A serious punishment is needed especially for sexual crimes against children that destroy one’s life.”