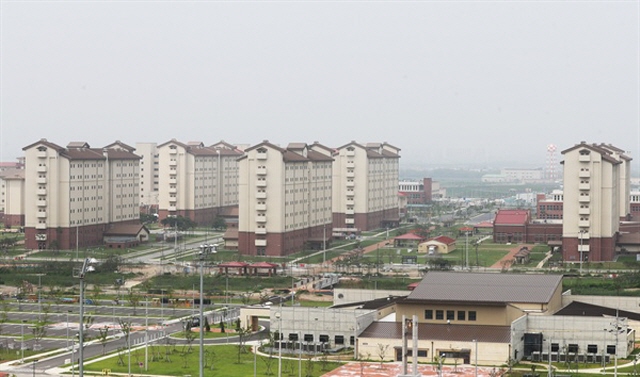 PYEONGTAEK, May 7 (Korea Bizwire) — With a North Korea-U.S. summit about to take place following the historic inter-Korea meeting, the residents of Pyeongtaek, the site of controversy due to the U.S. military base there, are revealing their true feelings concerning public discourse on whether the U.S. army should pull out from the proposed relocation to the area.

A total of 40,000 U.S. soldiers and military personnel are set to relocate to Pyeongtaek from various American military bases around Seoul and its vicinity, and residents expect the move to add vitality to the local economy.

The public discussion surrounding the withdrawal of U.S. troops, therefore, has caused controversy, especially for residents of Pyeongtaek.

After U.S. President Donald Trump’s visit to the U.S. military base in Pyeongtaek last December, the area has come to symbolize the military cooperation of the ROK-US Combined Forces Command.

But as South-North relations quickly improved, it spurred a national discussion of a possible downsizing of the U.S. military presence in Pyeongtaek, to which the residents of the city have expressed negative sentiment.

“The discussion of a withdrawal of U.S. forces in the region is mostly talked about in political circles and there is no wavering of people’s views in Pyeongtaek, where we are ready to usher in a new era,” said Lee Hun-hui, the director of a committee on Korea-U.S. Cultural Exchange, who went on to say that if the U.S. army were to pull out, there would be great confusion in the region due to the impact on the local economy.

With international media outlets such as the New York Times and CNN continuing to report on the possible withdrawal of U.S. forces, the locals are intent on seeing how the matter plays out until the U.S. issues a formal statement concerning the issue.

But some say that a step-by-step withdrawal is inevitable if inter-Korea relations improve, as the purpose of the U.S. military presence would lose meaning.

“The loss to the region should be minimized, and comprehensive measures are needed to offset the possible withdrawal,” said Lee Min-wu, the leader of a civic group in Pyeongtaek.