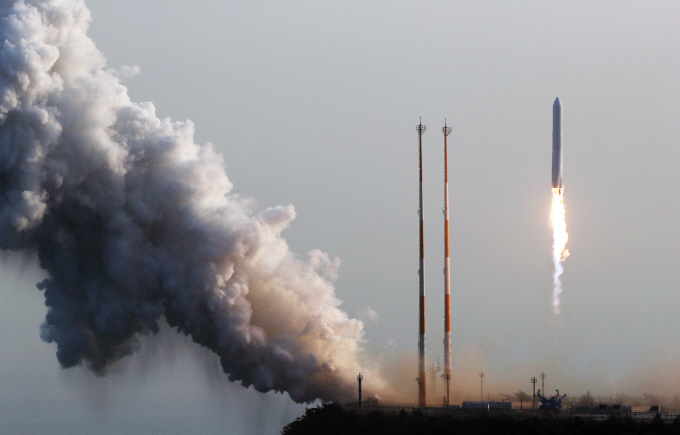 The test of the 75-ton thrust engine was conducted using a single-stage rocket that was launched from the Naro Space Center in Goheung, South Jeolla Province, at 4:00 p.m.

The rocket engine, designed and developed by the Korea Aerospace Research Institute (KARI), will be used on the three-stage Korea Space Launch Vehicle-2 (KSLV-2) currently under development.

The 75-ton thrust engine is considered a core technology behind the KSLV-2, which would make South Korea the seventh country in the world to build a space launch vehicle with homegrown technology.

The Ministry of Science and ICT and KARI said the critical rocket motor combustion time was maintained for 151 seconds, surpassing an initial goal of 140 seconds.

KARI said evaluating the performance of a liquid propellant rocket engine is determined by the length of the total combustion time.

The rocket flew for about 10 minutes after reaching a maximum suborbital altitude of 209 kilometers and hit the ocean 429 kilometers southeast of the country’s southern resort island of Jeju.

“We have confirmed the flight of the 75-ton engine after analyzing all available information,” Lee Jin-kyu, the vice science minister, said. “The development of the space engine is considered a core technology and the most difficult test for the development of a South Korean launch vehicle.”

So far, the country has relied on foreign launch vehicles for suborbital satellites. The successful launch of the KSLV-2 would open a new opportunity to enter the commercial space launch market.

Currently, only six countries — the United States, Russia, France (the EU), Japan, China and India — possess the technology for the development of such space vehicles, the ministry said.

Meanwhile, ten countries — the six aforementioned nations along with the Ukraine, Israel, North Korea, and Iran — currently have the technology for such rocket engines.

The performance of the new engine, including its flight controls and thrust units, was closely monitored during the flight, with no abnormalities detected, official said.

The test launch was earlier suspended for 10 months when abnormal readings were detected in the rocket propellant pressurization system.

KARI said it has changed the construction of its engine over 20 times and conducted ground-based combustion tests more than 100 times to confirm the viability of the engine.

KARI said four of the indigenous thrust engines will be grouped together on the first stage and one on the second stage of the KSLV-2, the ministry said. The whole rocket is scheduled to blast off in 2021.

The KSLV-2 rocket is to be South Korea’s first space vehicle wholly designed and built in the country. It will be used to place unmanned satellites into the Earth’s orbit and for other commercial applications.

The launch is the first time in nearly five years that South Korea has showcased its active space program, following the launch of the KSLV-1 from the Naro in 2013.

The government said it is pushing forward a plan to build a space rocket center near the center by 2025 by injecting 36 billion won (US$32 million).