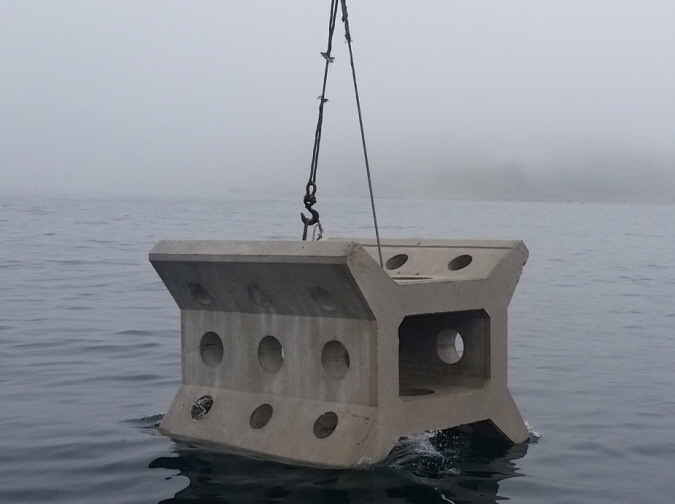 KIOST said Thursday that it has established the Korea Marine Ecology Block, a research institute, in a joint venture with a local lime fertilizer manufacturer.

The surface is then treated with a corrosive soil coating material containing amino acids and organic ingredients.

The coating also plays a major role in creating an underwater ecosystem by proliferating plankton and helping microbes and others attach them to aquatic plants.

The substance can also be applied to existing concrete reef surfaces, which has the effect of neutralizing harmful ingredients such as ammonia from concrete as well as strong alkalinity.

Existing artificial reefs and sea forests are usually made of concrete blocks.

Concrete has problems that cause “efflorescence” with strong alkaline materials and cause toxic substances to leak, making it difficult to multiply water plants and algae.

It is expected that the commercialization of eco-friendly ecological blocks will greatly reduce the amount of oyster shells that cause environmental pollution by limiting the amount discarded every year.

According to a report by the Korea Maritime Institute, the country’s oyster production stood at 340,000 tons as of 2018, with 280,000 tons of shells being discarded.

Among the waste shells, only some will be recycled into agricultural soil improvement agents, lime fertilizers and industrial raw materials, while the rest will be treated as industrial waste or left unattended.

Shells left unattended have exposed many problems such as polluting coastal fishing grounds and damaging the natural landscape by generating a bad smell.

“If we commercialize the technology to recycle oyster shells, we can expect the effect of killing two birds with one stone to solve the problem of marine waste and activate the circulating system of fisheries resources,” a KIOST official said,