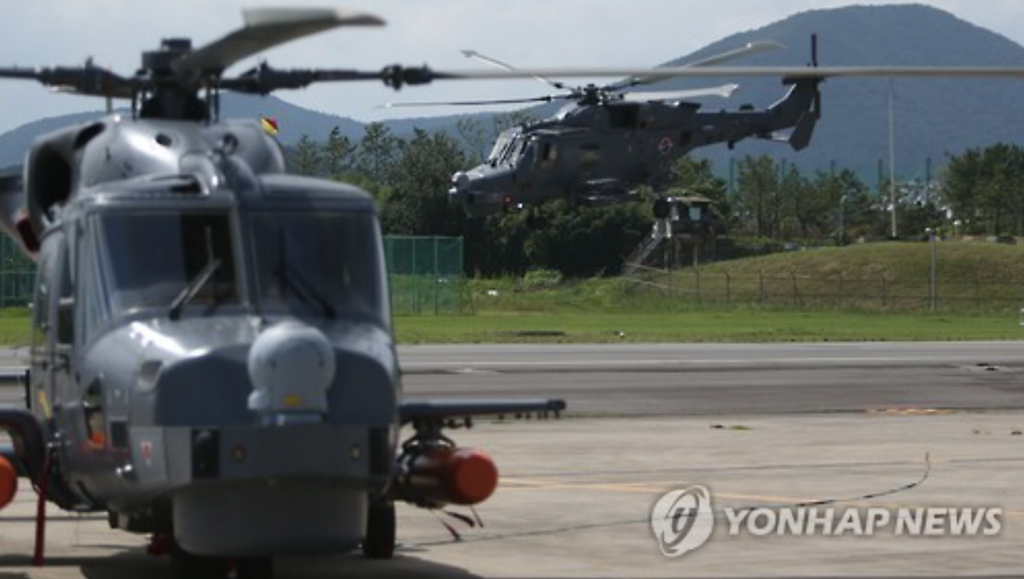 AW-159 maritime choppers during a test flight at a Navy unit in Changwon, 398 km south of Seoul. (image: Yonhap)

The Defense Acquisition Program Administration (DAPA) said the military plans to invest about 900 billion won (US$768 million) to pick a helicopter model for future service in the country’s Navy. The three models being considered are AgustaWestland’s AW-159, Sikorsky’s MH-60R, and NHIndustries’ NH-90.

“We are planning to sign a deal with one of the three chopper companies by the end of 2018 and the new choppers will be gradually deployed from 2020 through 2022,” a DAPA spokesman said.

If the new line of choppers reach front line naval units, they will be tasked with containing North Korean submarines and surface vessels, and will be deployed on next-generation frigates, he said.

The demand for maritime choppers that can hunt subs has grown in importance with the North having tested submarine launched ballistic missiles last year.

The deployment is the second phase of the military’s broader plan to add a total of 20 maritime choppers to its fleet. The first batch of eight AW-159 choppers were all deployed by 2016, according to DAPA.

The three candidate chopper types are all equipped with high-tech radar and sonar to detect submarines, plus they can be armed with anti-ship guided weapons, torpedoes and guns. The radar have a range of between 290 and 450 kilometers.

Separately, the military plans to allocate a total of 890 billion won to upgrade 40 CH-47 and HH-47D Chinook helicopters, now operated by the Army and Air Force, from 2018 through 2028, DAPA said in a statement.

The upgrade of the 25-year-old Chinook heavy-lift helicopters will begin next year in cooperation with foreign companies, it said without elaborating. The changes to the workhorse choppers will be centered on the cockpits, engine power, autopilot systems and overall survivability.