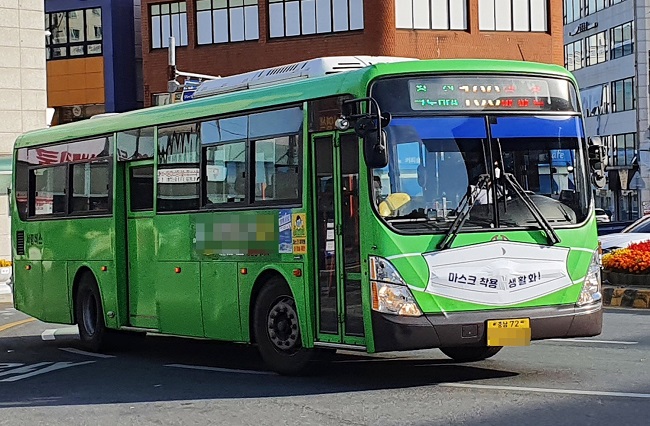 A bus with a mask sign on its front is shown in this photo provided by the Seosan municipal office on Nov. 2, 2020.

The new five-tier scheme, which takes effect Saturday, breaks the current three levels into five — 1, 1.5, 2, 2.5 and 3 — based on the average number of daily infections per week, according to the Korea Disease Control and Prevention Agency (KDCA).

The new system divides the nation into seven zones to allow provincial governments to decide the level of their own social distancing in accordance with the new infections in the regions.

The new system groups facilities into “priority” and “regular” sites in terms of the application of antivirus rules, while mask wearing and other key rules that were previously mandatory only at “high-risk” facilities will now apply to all facilities.

Starting Nov. 13, those who don’t wear masks in public spaces and transportation will be subject to fines of up to 100,000 won (US$88.3), and business owners who violate the public health regulations will be slapped with a maximum fine of 3 million won.

The KDCA said the revised rule is aimed at effectively containing COVID-19, also alleviating its impact on daily lives and business activities.

The health authority said it will maintain Level 1 social distancing guidelines under a new five-tier scheme, as the average number of new cases across the nation stood at 92.1 over the past week.

“It is most desirable that people abide by antivirus rules while maintaining the current Level 1 social distancing.”

Level 1 signifies a controllable level of transmission that allows people to carry out their ordinary lives while wearing masks and following social distancing rules at designated facilities.

The lowest level is imposed when the daily new cases remain below 100 for a week for the Seoul metropolitan area and 30 for other regions.

Under Level 1.5, the use of multipurpose facilities is restricted. At Level 2, the pandemic is considered to be spreading nationwide and nonessential outdoor visits and gatherings are discouraged in the affected zones.

Level 2.5 is adopted when the health system’s routine response capability cannot easily handle the situation, and the government will urge the public to remain at home.

At Level 3, which will be issued in the event that more than 800-1,000 new daily cases are reported across the nation for a week, the nation will effectively be placed on lockdown. 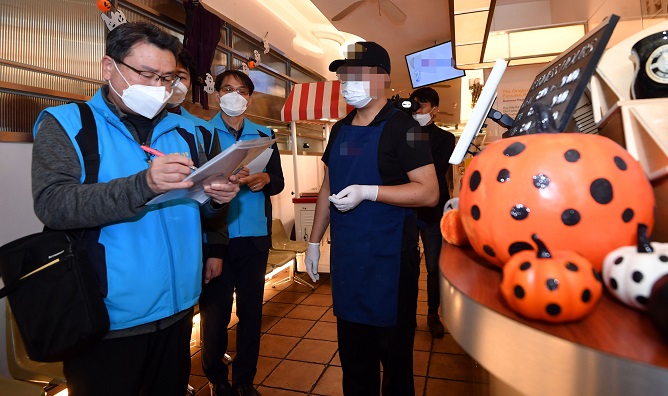 Seoul city officials monitor a visitor check-in system at a restaurant in Itaewon in Seoul on Oct. 29, 2020, ahead of Halloween, on concerns over the spread of COVID-19. (Yonhap)

In case of the highest level of social distancing, gatherings of over 100 people are banned, and multiuse facilities, except essential facilities such as hospitals, are closed.

From Level 2.5, companies and organizations are required to recommend that over one-third of employees work from home.

Level 3 makes it mandatory for all employees except those in essential services, including security, military and postal services, to work from home.

Under the highest level, schools should offer online classes only.

Religious facilities are allowed to have offline services under Level 1, maintaining a distance between seats.

Only 30 percent and 20 percent of the total seats can be used under Level 1.5 and Level 2, respectively, and churchgoers are banned from having meals together. Under the two highest levels, religious facilities are shut down.

The number of new cases across the nation slightly exceeded 100 for the third straight day Friday, due to sporadic cluster infections from senior nursing homes, hospitals and workplaces.

Health authorities remain on guard ahead of the winter season when people stay longer indoors and cold, dry weather provides a more favorable environment for the virus.

“The number of locally infected patients has been rising, which could surpass the government’s goal for COVID containment,” Sohn said.

“If the average number of new cases rises over 100 for a week in the Seoul metropolitan area, the government could raise the level to Level 1.5.”

On Thursday, South Chungcheong Province raised the Level 1 to a level equivalent to Level 1.5, after 20 more cases from a call center in Cheonan, 92 kilometers south of Seoul, raised alarms over the spread of the virus in the region.

The municipal government shut down the call center’s building and has been conducting virus tests on over 160 people who work at the same building.