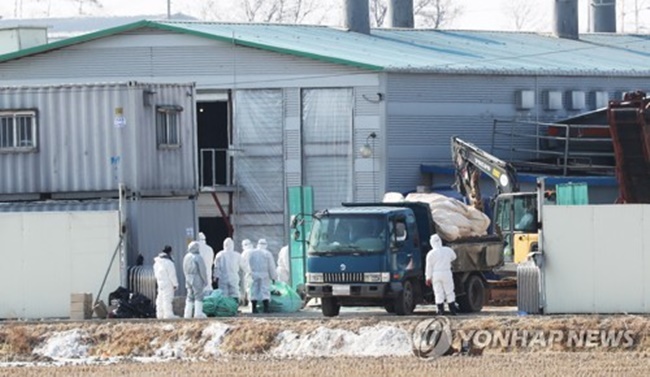 Quarantine officials cull chickens at a farm in Pyeongtaek, 70 kilometers south of Seoul, on Jan. 28, 2018, to contain the further spread of avian influenza. (Image: Yonhap)

The Ministry of Agriculture, Food and Rural Affairs announced a set of measures to improve the poultry-farming environment as a series of avian influenza and sales of eggs contaminated with harmful insecticides sparked public concerns last year.

Most local poultry farms raise egg-laying hens in battery cages smaller than an A4 sheet of paper, barely over the minimum requirement. Keeping animals in such close confinement enables the disease to spread rapidly.

The ministry said it will support the merger of small poultry farms to maintain at least 500 meters between them and prohibit the opening new ones within 3 kilometers from winter sites of migratory birds, which are believed to be the cause of avian influenza strains being found in the country.

To better take preventive measures, the ministry will help set up monitoring cameras at over 5,600 poultry farms this year and regularly inspect their quarantine efforts.

The government will start the registration of butchers and meat shops at traditional markets, and conduct inspections of poultry production during the distribution process.

After test running the new system this year, the government will ban sales of unregistered live poultry next year and ban the trade of all live chickens and ducks at outdoor traditional markets by 2022.

Currently, live chickens and ducks are traded at 200 markets nationwide, accounting for 35 percent of the country’s annual chicken supply of 43 million, according to the ministry.

The latest measures come as South Korea has been grappling with the spread of bird flu at local farms, raising alarms just two weeks ahead of the Winter Olympics slated in Gangwon Province.

The ministry confirmed an additional case of the highly contagious H5N6 bird flu at a layer chicken farm in Pyeongtaek, 70 kilometers south of Seoul, marking the 16th case this winter.

About 1.78 million poultry have been culled since November to curb the spread of the highly contagious animal disease, according to the ministry.