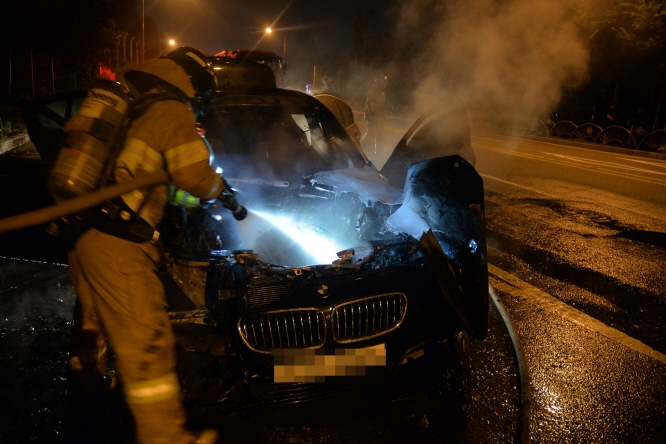 Youn Kwan-suk, a lawmaker of the ruling Democratic Party and a member of the parliamentary committee on Land, Infrastructure and Transport, said officials and lawmakers will hold meetings to work out details. No specific time frame has been given.

“We will lay the legal basis to impose penalties, including punitive damages, and to order the operations of cars be stopped in case an automaker causes damages to consumers by intentionally and maliciously not taking steps to cope with defects,” Youn said in a meeting with officials of BMW’s South Korean unit and transport ministry.

Kim Hyo-joon, chief of BMW Korea, offered another public apology for causing concerns over a series of fires in BMW cars.

BMW Korea has completed safety inspections on nearly 70 percent of its cars that are subject to recalls.

Shin Chang-hyun, a lawmaker for the ruling party, said 72,188 out of 106,317 BMW cars had undergone safety inspections as of midnight Sunday, citing a report by the Ministry of Land, Infrastructure and Transport.

BMW Korea has so far replaced the exhaust gas recirculation (EGR) in 1,860 cars. BMW has said faulty EGR is to blame for fires of it cars operating in South Korea.

BMW Korea has said it plans to complete safety inspections of the remaining cars by Tuesday — six days before the official recall is set to start to fix the faulty part, which is designed to clean up emissions.

On Sunday, a BMW 520 sedan caught fire on a road in Hanam, just east of Seoul, raising to 38 the number of vehicles made by the luxury carmaker that have been affected by the problem.

The transport ministry said it has begun an analysis on data related to the design changes made to the automotive part after getting it from the carmaker.