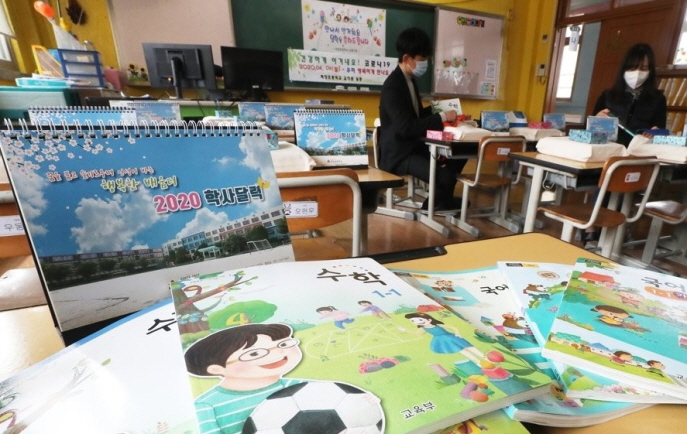 Teachers sort out textbooks and gifts for would-be first graders at a classroom of Pajang Elementary School in Suwon, south of Seoul, on March 17, 2020. (Yonhap)

The unprecedented move to introduce online classes at elementary, middle and high schools nationwide will be carried out step by step, depending on grades, according to the education ministry.

The new school year here usually starts in March, but the country had postponed it three times by five weeks to next Monday over concerns that schools are vulnerable to small-scale cluster infections of COVID-19.

To provide schools with one or two weeks of preparations for remote classes, the government has decided to push back the start of the spring semester again to April 9.

“To brace for a possible prolonged pandemic and prepare for future education, it is necessary to boldly push for remote classes right now,” Education Minister Yoo Eun-hae told a press briefing.

Under the government’s blueprint, middle and high school students in their third and final year will start to learn online next week.

The new academic year will start April 16 in case of the first and second graders at middle and high schools, and elementary school students in the fourth to sixth grades.

The first to third graders at elementary schools will receive online remote learning starting April 20. For kindergartens, the opening will be postponed indefinitely.

It remains uncertain when students will be able to go to schools due to a steady rise in infections.

“Taking into consideration the regional trend of infections and school situations, the government will review the flexible operation of school affairs, including running online classes together with offline ones,” Yoo said.

She cautiously expected that running online and offline classes in parallel may be possible starting in late April.

Online classes appear to be a viable alternative for students to learn and for schools to meet the statutory yearly school days. 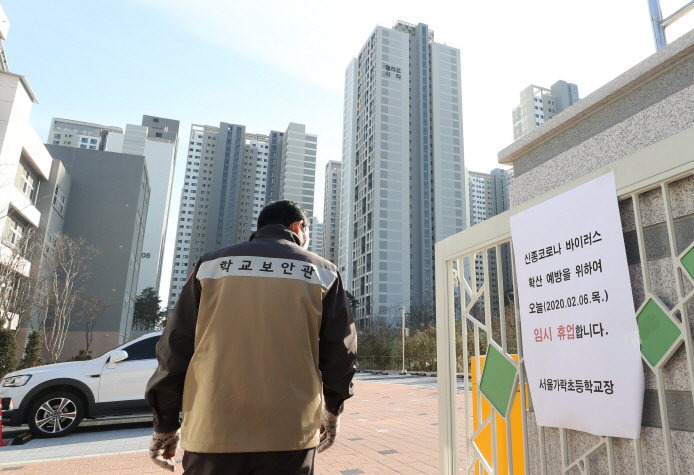 This photo taken on Feb. 6, 2020, shows a school sheriff standing in front of an elementary school in eastern Seoul that temporarily closed following the new coronavirus outbreak. (Yonhap)

The health ministry, meanwhile, announced that the opening of child care centers will be delayed indefinitely as well.

“The government took into consideration the need to protect infants’ health, maintain social distancing and contain the spread of the virus in communities,” the ministry said. “Unlike schools, it is impossible for child care centers to do online operations.”

Daily new cases of the coronavirus remain around 100 for nearly three weeks, but concerns about cluster infections and imported cases linger. South Korea has reported a total caseload of 9,786 since the first case on Jan. 20.

Despite the government’s plan, there are concerns over whether education authorities can fully prepare the technical infrastructure needed for online remote classes.

The number of students having no smart devices reached around 170,000 as of Monday, the ministry said, citing its survey on 67 percent of all schools.

City and provincial governments plan to provide smart devices and connections to the internet with students in low-income households, according to the ministry.

The government also decided to postpone the national college entrance exam, set for Nov. 19, by two weeks to Dec. 3.

The ministry called it an “inevitable” decision to help students have more time to prepare for the College Scholastic Aptitude Test (CSAT) and teachers smoothly manage school affairs.

Since the country adopted the CSAT, known as “suneung” in 1993, it marks the fourth time that it will postpone the test.

South Korea delayed the college entrance exam due to the hosting of the APEC summit in the southeastern port city of Busan in 2005 and the Group of 20 summit in Seoul in 2010.

The 2017 massive quake in the southeastern city of Pohang also prompted the country to delay it.