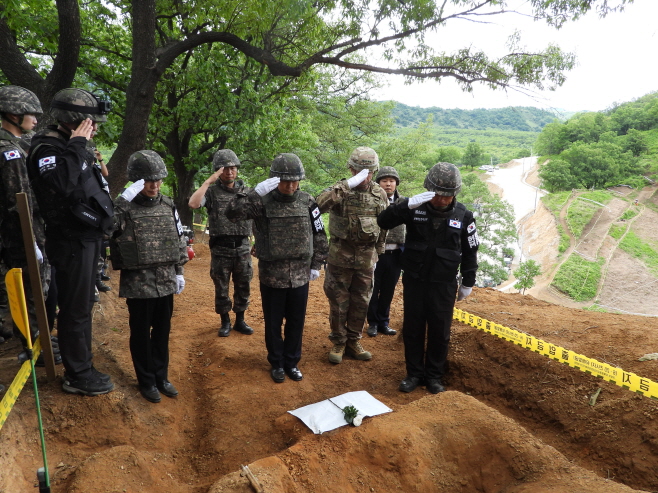 Soldiers give a salute in front of the remains of a South Korean soldier killed in the 1950-53 Korean War inside the Demilitarized Zone (DMZ). (Yonhap)

SEOUL, Nov. 30 (Korea Bizwire) — A memorial to honor men in uniform killed during the 1950-53 Korean War will be built inside the Demilitarized Zone (DMZ) separating the two Koreas next month, the defense ministry said Saturday.

The plan comes as the military officially wrapped up its eight-month project to retrieve remains of the deceased soldiers on Arrowhead Ridge in Cheorwon, some 90 kilometers northeast of Seoul.

“To honor the sacrifice of deceased soldiers and to let the people better feel the changing DMZ from a zone of conflict into a symbol of peace, we decided to build a memorial inside a guard post located on the ridge by December,” the ministry said in a release.

Artifacts unearthed, photos and other related documents will be on display, according to the ministry.

“Based upon achievements of this year’s excavation, we will continue to carry out such operations next year by expanding the scope to all across the DMZ,” the ministry said, adding that South Korea is “prepared to launch a joint project with North Korea at any time when North Korea responds.”

The project was launched in April on the ridge, one of the fiercest battlefields during the war, where about 300 soldiers from South Korea, the United States and France are believed to be buried, in accordance with the inter-Korean military agreement signed in September last year.

But the project was carried out by the South Korean military alone, as the North has remained unresponsive to the South’s call for its joint implementation as agreed.

During the excavation, around 2,030 pieces of bones believed to have belonged to about 260 service personnel from Korean, Chinese, and U.N. forces, have been found.

The military also removed over 450 land mines and some 5,700 unexploded ordnance, and collected 35 tons of iron debris, according to the ministry.

“It was the first excavation work inside the DMZ, which had even been beyond imagination for a long time,” the ministry said, vowing to make strenuous efforts until the last remains are retrieved and returned to their loved ones.

During the three-year conflict, 178,569 South Korean and U.N. soldiers were killed, and 42,769 others still remain missing. Of them, 124,000 bodies have yet to be retrieved, according to government data.