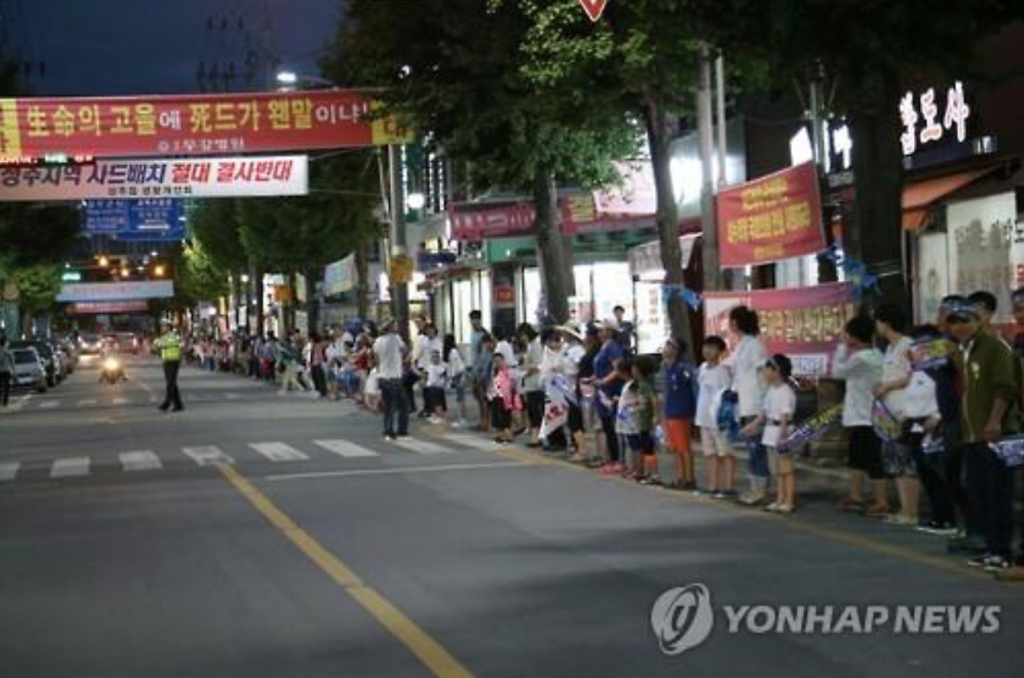 In this photo taken on Aug. 27, 2016, Seongju residents participate in a rally against the deployment of a THAAD battery in the rural county by 2017 due to health worries. (image: Yonhap)

SEOUL, Aug. 29 (Korea Bizwire) – South Korea’s military said Monday it will conduct detailed examinations into three sites in the rural county of Seongju to check if alternate locations can be found to deploy an advanced U.S. missile defense system.

The move comes as Seongju residents strongly protested the government’s decision to install the Terminal High Altitude Area Defense (THAAD) system at the Seongsan artillery base which is not too far away from the county’s main population center. The government announced on July 13 that it plans to have a THAAD battery in place in Seongju, 296 kilometers southeast of Seoul, by the end of 2017, to better counter growing threats from North Korea.

“We have picked three possible sites for THAAD after consultations with the provincial government. The joint team composed of Korean and U.S. officials will make field visits and carry out a review of the sites’ availability for THAAD,” Moon Sang-gyun, a spokesman for the Ministry of National Defense, said in a press briefing.

The three candidate sites are the area near Mt. Yeomsok in Geumsoo-myeon, Mt. Kkachi in Sooryoon-myeon and a golf course operated by Lotte Group in Chojeon-myeon.

In its own analysis, the defense ministry already found the first two sites not appropriate for the missile defense system due mainly to cost reasons. The golf course in northern Seongju has emerged as a likely alternative site due to its remote location from residential areas and existing and good infrastructure.

“We will apply six principles — operational effectiveness, health concerns by residents, infrastructure, overall safety considerations, construction time and cost, and the preparation period for installation — to select an alternative site as quickly as possible,” the official said.

The residents of Seongju have opposed the THAAD system because they are concerned about the potential health risks regarding the powerful X-band radar that comes with the missile defense system. They have recently asked the government to select an alternate site in Seongju for the planned deployment of the THAAD battery.

On July 8, Seoul and Washington announced they will deploy a THAAD battery in South Korea to better defend against nuclear and missile threats from the North.

The decision comes amid the North’s continued test firings of missiles, including submarine-launched ballistic missiles (SLBMs), and nuclear tests in recent years.

Most recently, North Korea test-fired an SLBM at a high angle near its eastern port city of Sinpo on Wednesday. It flew some 500 kilometers and fell into waters 80 km inside of Japan’s air defense identification zone. If fired at regular angle, experts said the SLBM could have flown over 1,000 km.

“Given the missile’s flight range, North Korea appears set to complete the development of SLBMs within the next one to three years. It means the North could target the U.S. mainland with an SLBM in due time,” a defense ministry official said.

The defense ministry said Monday it will beef up the capability of South Korean submarines as a deterrent against the North’s ever-growing missile threats. But it said “no decision has been made yet to build a nuclear-powered submarine.”