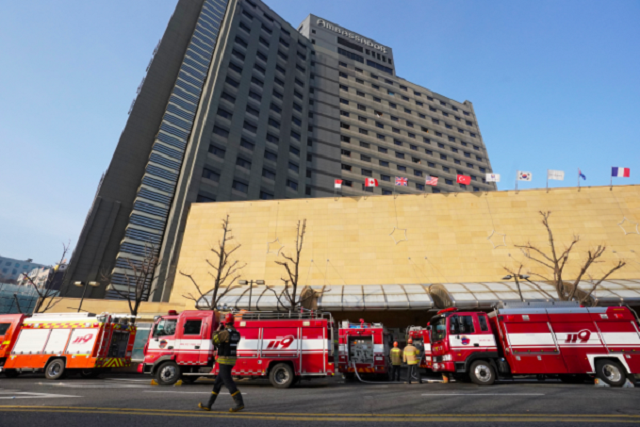 Fire trucks are lined up outside the Grand Ambassador Seoul hotel on Jan. 26, 2020, after an early morning fire forced 600 guests and hotel employees to evacuate the building. No serious injuries were reported. (Yonhap)

The National Disaster Management Institute under the National Fire Agency announced that had formed a business agreement with KEPCO KDN Co., a power information technology solution provider, to launch joint R&D efforts for the development of an AI-based people counting system that can be used for rescue activities during fires.

The system, originally developed by KEPCO KDN to prevent accidents at power plants, uses a complementary metal oxide semiconductor (CMOS) image sensor-using terminal unit to monitor the number of people within a facility in real time.

The institute decided to kick-start joint research based after determining that the system could be used during fires.

It plans to upgrade the system to be able to identify the number and location of people to rescue within buildings, taking into consideration smoke and the condition of the people requiring rescue.

To this end, the institute intends to carry out research to enhance the recognition rate through a trial application of the system for a total of five buildings, including high-rise buildings and factories, starting from September.