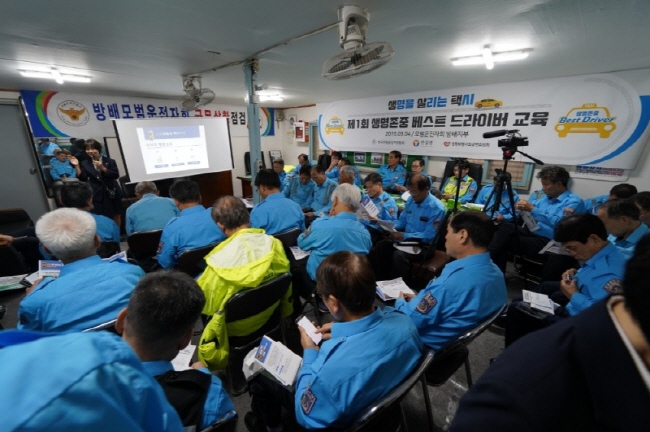 A total of 3,500 best drivers will participate in the program this year with the aim to train all 25,000 drivers by 2020. (image: Citizens’ Coalition for Safety)

The Life Insurance Social Contribution Committee announced on Thursday that it plans to work with the Citizens’ Coalition for Safety (CCS) and the Korea Best Driver Association to train taxi drivers to prevent others from committing suicide.

The training will involve consoling those with suicidal urges and taking emergency measures when a suicide attempt is made.

‘Lifeguard’ drivers will be charged with the task of reporting suicide attempts directly to authorities.

Stickers will be attached on the rear seat of the cab with an emergency number (☎1393) to contact the suicide prevention team run by the Ministry of Health and Welfare along with a manual that addresses various emergency situations kept inside the vehicle at all times.

“Taxi drivers are in an environment where they get to meet different kinds of people,” said Lee Yun-ho, head of safety policy at CCS. “They are more likely to run into people struggling with suicidal urges before it’s too late.”