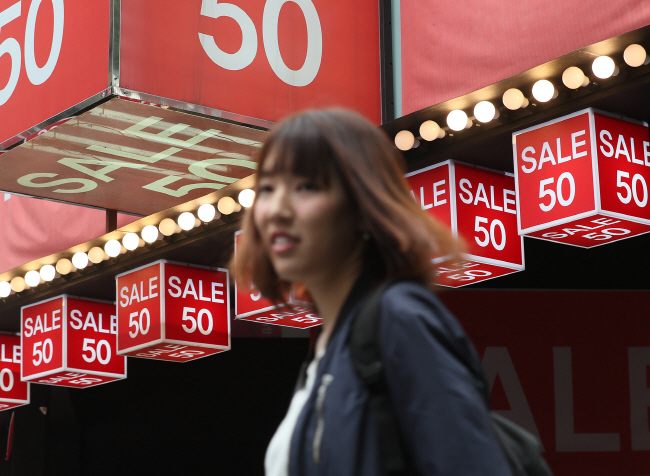 The annual Korea Sale FESTA will kick off for a 22-day run on Nov. 1. (Yonhap)

The annual Korea Sale FESTA will kick off for a 22-day run on Nov. 1, according to the Ministry of Trade, Industry and Energy.

As of Thursday, around 600 companies have expressed an intention to participate in the event, up 150 from a year earlier.

“We hope the upcoming festival will lend a hand to the local economy and provide consumers with the joy of shopping through various discount programs,” an official from the ministry said.

The event is significant as South Korea has been making efforts to revitalize consumer sentiment amid a prolonged economic slump.

South Korea’s consumer sentiment improved from a month earlier in September, but is still below the benchmark, central bank data showed.

The composite consumer sentiment index came to 96.9 in September, with a reading below the benchmark 100 meaning pessimists outnumber optimists.

The weak data came after Asia’s fourth-largest economy showed signs of a slowdown, partly on the prolonged U.S.-China trade dispute.

Through the festival, the ministry said it hopes to add vitality to the local economy.

Major department stores chains, such as Lotte, Hyundai, and Shinsegae, along with other supermarkets, traditional markets and convenience stores, will offer major discounts over the three-week festival.

Local department stores had earlier claimed they would boycott the festival, saying that the discounts were too burdensome.

Tech manufacturers such as Samsung Electronics Co. and LG Electronics Inc. will offer major discounts along with special gifts.

The ministry said it will make efforts induce more firms to participate in the event by minimizing government intervention.

“Although the exact scope of the discounts will vary depending on the participants, it will be at least similar to that of last year’s event. In some cases, the discounts will be even higher by 10 to 20 percent,” another official from the ministry said.

As for foreign tourists, South Korean duty-free shops are preparing for special promotions and offering an even wider range of discounts.

Public organizations will provide foreign tourists with discounts in accommodation and transportation as well.