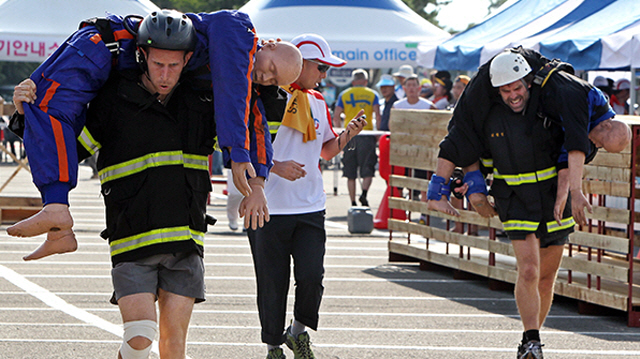 The Sept. 10-18 games, also known as the “mini-Olympics for firefighters,” are expected to bring together about 6,000 full-time, volunteers, industrial, military fire service personnel and their families from 50 countries worldwide.

In April, the governing body of the games, based in Perth, Australia, signed a deal with the government of North Chungcheong Province, to which Chungju belongs, on the hosting of the competition.

According to the Central Fire Service, the competition involves 74 individual and team sporting events, including the blue-ribbon event, the Toughest Firefighter Alive, fire engine driving and other events that are specific to firefighters’ emergency service roles.

The service plans to make the competition an opportunity for firefighters worldwide to exchange information and foster comradeship.

The biennial WFG has been held 12 times, with the first one being held in New Zealand in 1990. In 2010, the South Korean city of Daegu hosted the event.