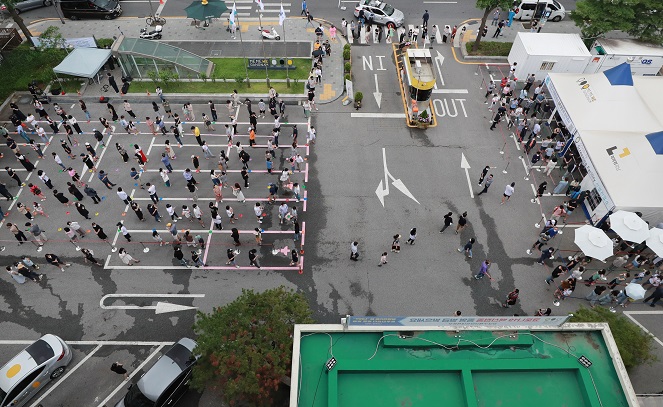 SEOUL, July 9 (Korea Bizwire) — South Korea announced Friday it will place the greater Seoul area under the toughest social distancing rules of Level 4 as concerns of a fourth wave of new COVID-19 outbreaks over the summer grow stronger.

The decision to implement Level 4 guidelines in Seoul, Gyeonggi Province and Incheon, 40 kilometers west of the capital, Monday for two weeks was reached in an interagency COVID-19 response meeting chaired by Prime Minister Kim Boo-kyum.

Under Level 4 rules, gatherings of more than two people will be banned after 6 p.m. Demonstrations will also be restricted, although the government will allow one-person protests.

Weddings and funerals can only be joined by relatives. Entertainment establishments, including night clubs, will be ordered to shut down, while restaurants will be allowed to have dine-in customers until 10 p.m.

The government also decided to suspend incentive programs, such as outdoor no-mask rules and exclusion from headcounts in private gatherings, for those who have received COVID-19 vaccine shots.

Kim highlighted the severity of the situation in Seoul and its surrounding area. “In Seoul alone, we are seeing over 500 cases for the third straight day, while four out of five of nationally reported cases are from the capital area,” Kim said. 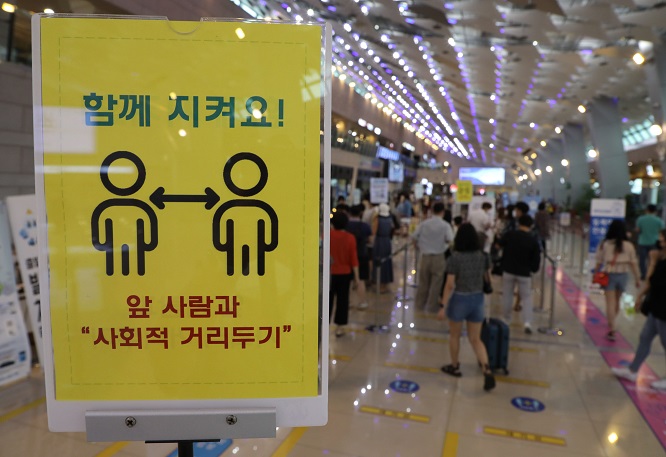 A notice, which asks people to maintain social distancing amid the coronavirus pandemic, is posted at Gimpo airport in Seoul on July 8, 2021, when South Korea reported the highest daily COVID-19 cases since the pandemic hit the nation early last year. The country is bracing for another wave of the pandemic, prompting authorities to consider imposing tougher virus curbs. (Yonhap)

The prime minister also asked local governments outside of the capital area to take proactive measures, including readjusting of distancing rules, to preemptively deal with the pandemic.

Kim also offered an apology to small business owners and self-employed people who are likely to be severely affected by the government’s decision.

“It will be difficult to completely make up for the damage, but the government will do its best to provide the utmost support through a micro enterprise support act,” he added.

The decision was made in light of a recent surge in new virus cases across the country, with a concerning number of outbreaks reported in the capital area.

On Friday, South Korea reported 1,316 cases, the highest daily COVID-19 tally since the nation reported its first case in early 2020.

Jeong Eun-kyeong, head of the Korea Disease Control and Prevention Agency, said Thursday that South Korea “is at a stage of entering the fourth wave” and the worst is yet to come.