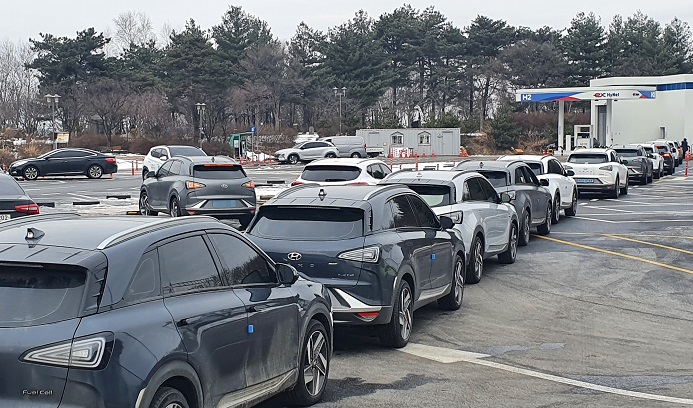 This file photo, taken Jan. 21, 2021, shows cars waiting to use a hydrogen filling station at a rest area in Chuncheon, 85 kilometers northeast of Seoul. (Yonhap)

DAEJEON, March 17 (Korea Bizwire) — South Korean state-run research organization has joined hands with a private company to push for the localization of a core fuel cell component for which the country has relied entirely on imports until now.

On Tuesday, the Korea Research Institute of Chemical Technology signed a technology transfer agreement with local chemical company Chemtros Co. for the localization of the perfluorinated sulfonic-acid (PFSA) ionomer that is a core component of fuel cells used in hydrogen vehicles.

For hydrogen vehicles, electrolyte membranes play an important role since they allow the hydrogen ions to travel through the fuel cell and react with oxygen. The PFSA ionomer manufacturing process integrates all kinds of fluorine chemical technologies.

Only a handful of global companies have the manufacturing technology to produce PFSA ionomer due to long and complicated manufacturing processes and sensitive variables such as humidity, temperature and explosiveness.

At present, South Korea relies entirely on imports for the material. The institute transferred nine-step manufacturing solutions including raw material production and ionomer manufacturing to Chemtros.