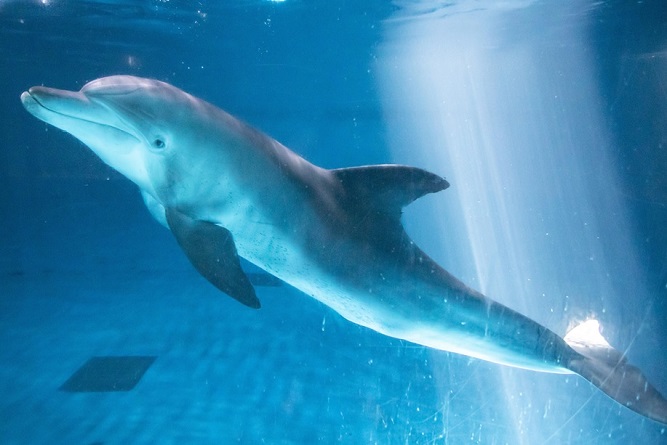 This undated photo, provided by the oceans ministry on Aug. 3, 2022, shows Bibong, an Indo-Pacific bottlenose dolphin.

SEOUL, Aug. 3 (Korea Bizwire) – South Korea will move a dolphin kept in an aquarium for more than a decade into a pen in the sea, as a step toward releasing him into the wild, the oceans ministry said Wednesday.

Experts said Bibong, a male Indo-Pacific bottlenose dolphin and believed to be 23 years old, could be capable of adapting to the wild, according to the Ministry of Oceans and Fisheries.

Bibong has been kept in a marine mammal park in Jeju after being illegally caught in waters off the island in 2005.

“The ministry will manage the release procedures in close communications with animal activists and the aquarium, while putting priority on Bibong’s safety. We will continue to seek measures to improve the welfare of marine animals,” Minister Cho Seung-hwan said.

Bibong will soon be moved to a pen in the sea off South Korea’s southern resort island of Jeju for rehabilitation, and the ministry will release him if the experts confirm that the dolphin is fully ready to return to the wild.

It plans to attach a positioning device to Bibong’s body for regular monitoring.

The rehabilitation training takes about a month in general, and when to send Bibong into the wild will be decided in accordance with his condition and other circumstances, a ministry official said.

Bibong is the last marine mammal of his kind in captivity, as South Korea has released seven Indo-Pacific bottlenose dolphins into the sea since 2013 after designating the species as a priority marine life the previous year.

Other than Bibong, a total of 21 belugas and other kinds of dolphins are currently at domestic aquariums, all of which have been kept after going through legal procedures for research or other purposes, according to the ministry.

A group of animal activists have pressed the government to free captive dolphins from marine mammal parks.

A total of 20 cetaceans, aquatic mammals such as whales and dolphins, died at local aquariums between 2016 and 2020.