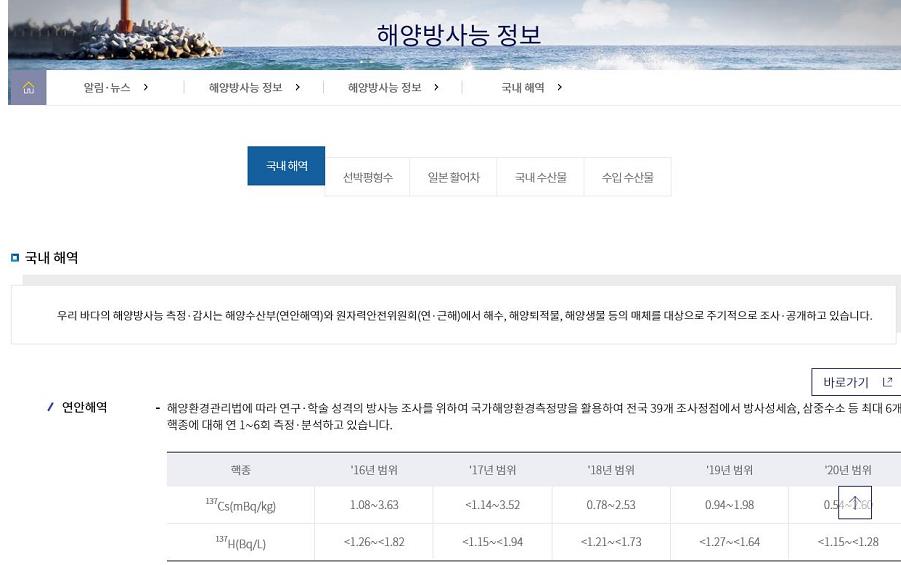 This photo provided by the Ministry of Oceans and Fisheries on July 4, 2021, shows a screenshot of the ministry’s website showing radiation levels of local seas.

SEOUL, July 4 (Korea Bizwire) — South Korea’s oceans ministry said Sunday it plans to launch a new platform to provide the latest information on the radiation level in local seas to the public amid growing safety concerns over Tokyo’s planned release of contaminated water.

“We plan to minimize the public’s concerns over the safety of our waters and seafood, and bolster monitoring on the radiation level of the ocean,” the Ministry of Oceans and Fisheries said in a statement.

In April, the Japanese government said it will release radioactive water stored in tanks at the wrecked Fukushima nuclear plant into the sea, possibly starting in 2023.

An estimated 1.25 million tons of such water are in temporary storage at the Fukushima nuclear plant on the east coast of Japan, which was devastated by a tsunami triggered by an earthquake in March 2011.

The move came as all storage tanks at the Fukushima plant are expected to be full as early as the fall of 2022.