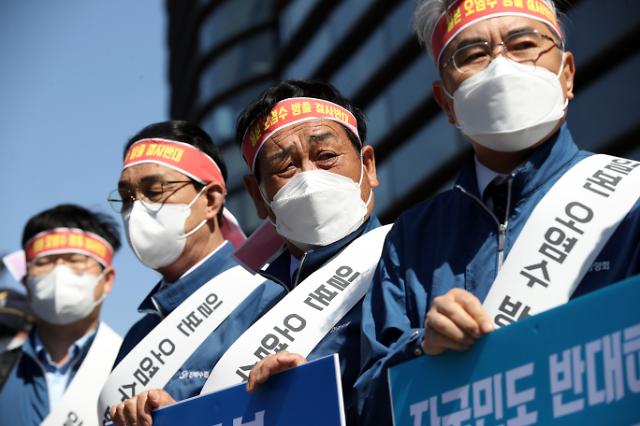 South Korean fisheries industry officials hold a rally in front of the Japanese Embassy in Seoul on April 14, 2021, to protest against Japan’s planned release of contaminated water into the sea. (Yonhap)

SEOUL, April 14 (Korea Bizwire) — South Koreans are stepping up protests against Japan’s decision to release contaminated water from its wrecked Fukushima nuclear power plant into the sea, as a dozen government leaders on Wednesday joined civic activists and fishermen in condemning the move as an irreparable disaster for the world’s marine ecosystem.

Heads of local governments nationwide successively issued statements or held news conferences to denounce Japan’s planned release of radioactive water as a threat to the safety and lives of all people and demand the Japanese government scrap the controversial plan.

Oh Kyu-seok, mayor of Gijang County in the southeastern port city of Busan, located just less than 200 kilometers from Japan’s Fukuoka, staged a one-person protest in front of the Japanese Embassy in Seoul beginning at noon.

“The Japanese government is attempting to release contaminated water from the Fukushima nuclear power plant, threatening the lives of all Korean people as well as Gijang County residents. Such a move cannot be absolutely acceptable if safety is not guaranteed,” Oh said.

The mayor said he will deliver his letter of protest to the Japanese Embassy, as well as to the offices of President Moon Jae-in and Prime Minister Chung Sye-kyun.

Tokyo announced on Tuesday that it plans to start releasing massive amounts of radioactive water, which has been stored in tanks at the wrecked Fukushima nuclear plant, in two years.

Lee Cheol-woo, governor of North Gyeongsang, the southeastern province adjoining the East Sea to the east, issued a statement condemning members of the Japanese cabinet over their decision to release Fukushima’s radioactive water.

“I and all of the province’s 3 million people strongly condemn the Japanese government’s decision to release contaminated water. Such a move will never be forgiven as it will pose a serious threat to provincial residents as well as the lives of fisherman depending on the East Sea for a living,” Lee said.

Lee Seon-ho, mayor of Ulju County in the southeastern city Ulsan, vowed to launch a boycott of Japanese products and remove all Japanese remnants in the region, unless Japan changes its position. 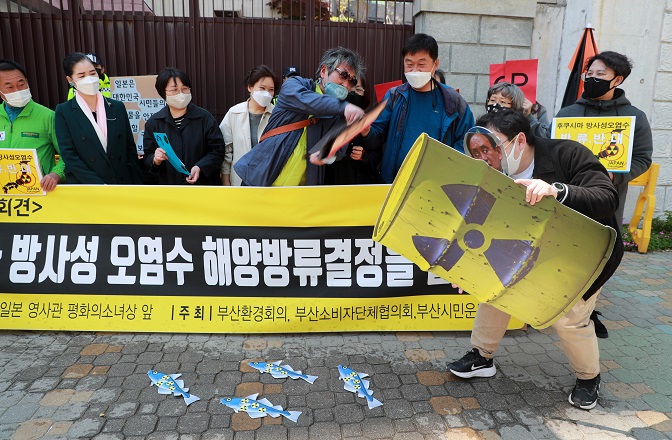 Members of environmental and consumer groups stage a rally in front of the Japanese Consulate in Busan on April 14, 2021, to protest against Japan’s planned release of contaminated water into the sea. (Yonhap)

On Tuesday, Ulsan Mayor Song Cheol-ho said he will send a letter of protest to the city’s Japanese sister cities to call for support in forcing the Tokyo government to retract its water release decision.

Gov. Kim Kyoung-soo of South Gyeongsang Province, which surrounds Busan, also said Japan’s planned release of contaminated water into the sea is a “crime” against humans and nature.

“Japan’s discharge of contaminated water is an act that will cause an irreparable damage not only to the neighboring countries but also to the entire world’s marine ecosystem,” Kim said in his Facebook post.

Resentment is also spreading among local environmental groups and fishermen.

Members from 51 civic groups in Busan held a protest rally in front of the city’s Japanese Consulate.

“Has Japan forgotten the past when it strongly condemned Russia over its dumping of radioactive waste into the sea? The Japanese government and Prime Minister Suga will be judged by history for the rash decision,” the Busan activists said in a statement.

A South Korean marine environmental activism group also staged a protest against Japan in front of the Japanese Consulate on Jeju Island.

“Research has warned that radioactive water discharged from Japan will reach the sea off Jeju after 200 days and the East Sea after 280 days. Japan’s move is an act of crime that will pollute the seas with radioactive materials,” the group said.

The local fisheries industry is very concerned about enormous damage from Japan’s release of contaminated water, as it will certainly heighten negative public perceptions on the safety of seafood.

On Tuesday, an alliance of 31 anti-nuclear and environmental civic groups in South Korea issued a statement expressing resentment at the Japanese government’s move to release contaminated Fukushima water despite objections from neighboring countries and vowing to do everything possible to prevent what it calls nuclear terror.