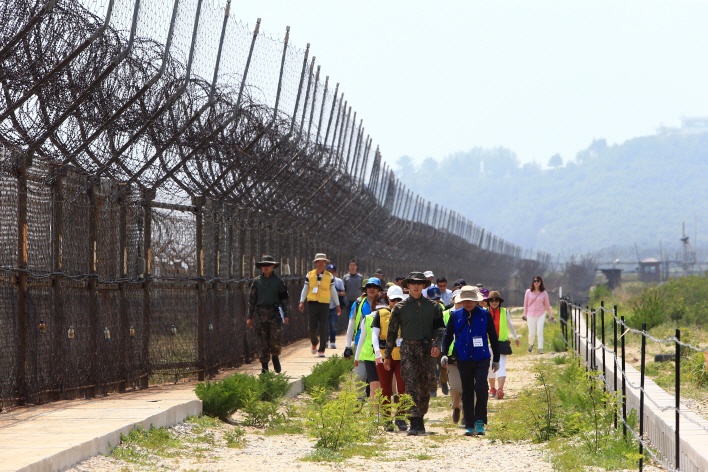 SEOUL, March 25 (Korea Bizwire) – South Korea will open an additional seven trekking routes this year along the Demilitarized Zone (DMZ), the highly militarized land border between the two Koreas, as part of the country’s broader project to facilitate peace in the tension-filled area, the government said Wednesday.

Last year, the first three trekking courses near the DMZ at three border towns — Goseong, Cheorwon and Paju — were opened to the public on a trial run as the DMZ Peace Trail project was officially launched.

The government will invest 14 billion won (US$11.4 million) this year for the project, designed to allow visitors to savor the wildwoods along the border and lessen animosity running between the two Koreas there.

Part of the money will be spent opening seven additional trekking routes along the DMZ at seven border towns — Ganghwa, Gimpo, Goyang, Yeoncheon, Hwacheon, Yanggu and Inje — the Ministry of Culture, Sports and Tourism said in a joint press release with three other ministries.

When the new routes are created, the DMZ Peace Trail will run 526 kilometers from the west coast county of Ganghwa all the way to the east coast border city of Goseong.

The government will also build 10 base centers along the trail this year that could be used as restaurants, cafes or guesthouses for the convenience of trekkers.

The 14 billion won will also be used to pave the trekking roads and install CCTVs for the safety of military bases located along the envisioned trail, according to the government.

“The government will make the DMZ Peace Trail an experience of the precious value of peace as well as a trek global citizens will like to take so that a new breath of vitality could be injected into the border area,” Vice Interior Minister Yoon Jong-in said in the release.