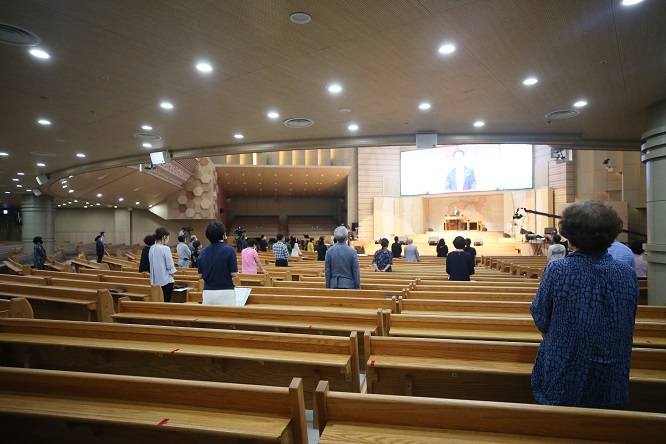 Worshippers attend a Sunday service while maintaining a social distance at a Protestant church in Gwangju, some 330 kilometers south of Seoul, on July 12, 2020. (Yonhap)

SEOUL, July 22 (Korea Bizwire) — The government will lift its ban on small church gatherings other than regular worship services this week as new COVID-19 cases linked to such gatherings have subsided in recent weeks, the prime minister said Wednesday.

Under the ban imposed on July 10 after a spike in cluster infections traced to small-scale church meetings, churches are barred from organizing small gatherings, including Bible classes, choir practices or prayer services, and offering group meals.

They are also mandated to use quick response (QR) code-based entry logs for visitors.

“Thanks to many Christian orders and worshipers who faithfully abided by quarantine guidelines, there have been few infection cases stemming from small gatherings involving churches,” the prime minister said during the meeting.

Even after the central government-level removal of the ban, however, regional administrative bodies will remain entitled to issue their own administrative orders to prohibit church gatherings if that is necessary, according to the prime minister.

“I thank the religious communities for leading the quarantine efforts … and believe they will continue to play a leading role in practicing everyday quarantine guidelines,” Chung noted.

The prime minister also said the government will send a military plane to Iraq on Thursday to bring home some 300 more South Korean nationals from the Middle Eastern country where COVID-19 cases are spiking.