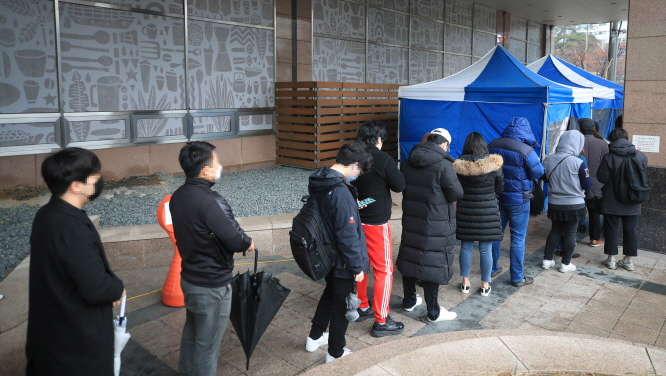 People who work at a building in southwestern Seoul where infections occurred stand in a line to be checked for the new coronavirus on March 10, 2020. (Yonhap)

The system is aimed at helping health investigators to swiftly check various data such as surveillance camera footage and credit card transactions of confirmed COVID-19 patients to recreate their routes.

The system — co-developed by the Ministry of Science and ICT; the Ministry of Land, Infrastructure and Transport; and the Korea Centers for Disease Control and Prevention (KCDC) — will kick off on Monday.

The system is based on the so-called smart-city data hub program currently under development by the central government and the municipal government of Daegu, the local epicenter of the outbreak.

“The Ministry of Land, Infrastructure and Transport will actively support health authorities in containing the spread of the COVID-19 virus by utilizing various smart city technologies,” Transportation Minister Kim Hyun-mee said in a press release.

Previously, KCDC investigators had to request important data such as CCTV footage and credit card transactions of confirmed patients from police investigators, resulting in a delay in epidemiological investigation.

The new system allows various data of the confirmed COVID-19 patients to be immediately analyzed and provided to health investigators.

As of Wednesday, the nation’s total COVID-19 cases came to 7,755, with 60 people, mostly elderly patients with underlying illnesses, having died of the potentially fatal disease, according to the KCDC.

Of the total, 242 new cases were detected on Tuesday, far below the daily increases of 500 or more last week but higher than the 131 new cases detected on Monday.