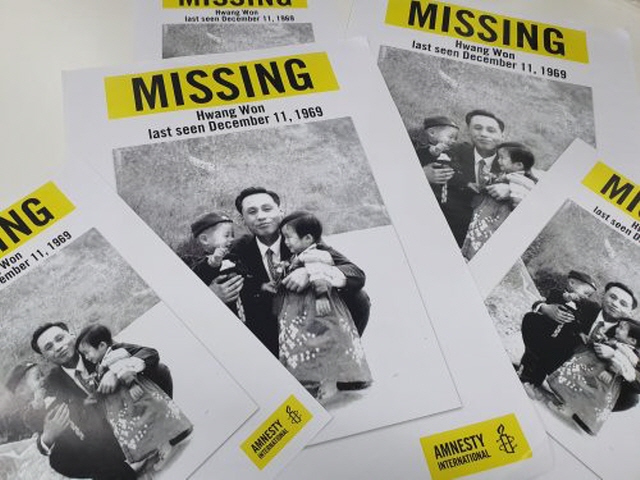 Radio producer Hwang Won was among the 11 being held in North Korea. (image: Amnesty International)

SEOUL, Feb. 14 (Korea Bizwire) — U.N. human rights experts urged North Korea on Thursday to send back 11 South Koreans abducted half a century ago in the latest diplomatic pressure on the communist country.

The U.N. experts called on North Korea to urgently provide information about their fate and whereabouts and to allow them to freely communicate with their relatives.

“It is entirely unacceptable that the families of the remaining 11 individuals have waited 50 long years in limbo with no information about their loved ones,” the experts said in a statement posted on the website of the Office of the U.N.’s High Commissioner for Human Rights, a day before the 50th anniversary of the release of the 39 people.

They also expressed concern over allegations that some of the individuals had faced torture and ill treatment following their disappearance.

Hwang In-cheol, whose father is among the 11 being held in North Korea, said he is very pleased that the U.N. experts gave their voice for the repatriation after 50 years.

“Too much time has passed, so I hope that North Korea can send them back home for family reunions,” Hwang said by phone after the U.N. statement was released.

Hwang was only 26 months old when his father, radio producer Hwang Won, got on the hijacked plane for a business trip to Seoul.

South Korea has repeatedly called for the repatriation of its nationals, but Pyongyang denies any kidnappings, claiming that any South Koreans in the North are there voluntarily.

The North has a track record of kidnapping South Koreans and Japanese.

In 2002, then-North Korean leader Kim Jong-il admitted to then-Japanese Prime Minister Junichiro Koizumi in Pyongyang that the North had abducted 13 Japanese citizens in the 1970s and 1980s to train its spies on Japanese language and culture.

The North at the time returned five of the abductees and claimed the other eight were dead.