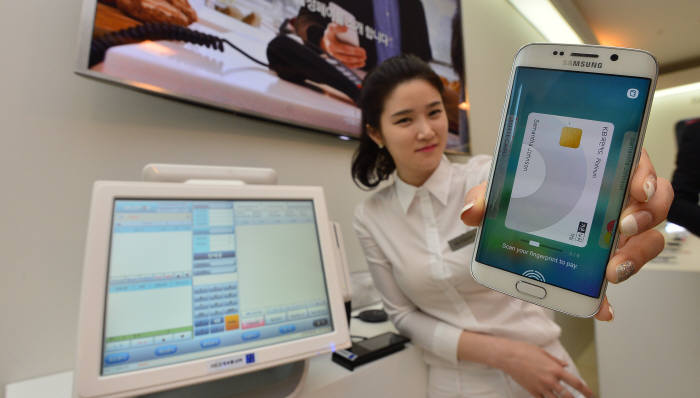 Samsung Pay will be available upon the release of Samsung’s next flagship model around September. (image: Samsung Electronics)

Samsung Pay will be available upon the release of Samsung’s next flagship model around September, and the company will gradually expand sales to China, Europe, Australia and Latin America, Rhee In-jong, vice president of Samsung’s mobile segment, said at an investors forum.

Industry watchers said the remark implies Samsung Electronics may showcase the next Galaxy Note model at the Internationale Funkausstellung (IFA) Berlin that falls in September.

Samsung first introduced Samsung Pay in March when revealing the Galaxy S6 and S6 Edge smartphones for the first time. The company, however, then said the mobile wallet service will be available later in 2015.

Rhee said while less than 10 percent of iPhone 6 users use Apple Pay, Samsung will aim to have around 15 to 20 percent of its smartphone users to make use of its payment platform.

Industry watchers said Samsung Pay stands out from other competitors as the service supports virtually all forms of payment — near field communication (NFC), magnetic secure transmission (MST) and barcode technologies — which reaches far more registers than that of its rivals.

The breakthrough was made possible after Samsung decided to buy U.S. mobile technology firm LoopPay, which has patent rights related to MST, a payments solution that works with existing magnetic stripe readers, they said.