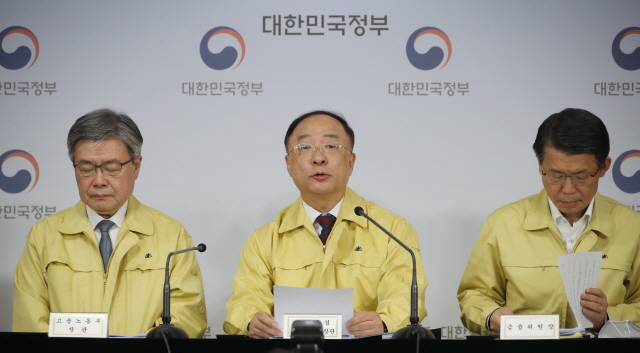 The aid package will rise to 135 trillion (US$109 billion) won from 100 trillion won, which had been set previously, to supply more liquidity into companies hit by the COVID-19 pandemic, the Ministry of Economy and Finance said in a statement.

Earlier in the day, President Moon Jae-in said a fund of 40 trillion won will be created to give aid to key industries, including the airline, auto, shipping and oil refinery industries.

Moon also ordered the government to draw up a third supplementary budget.

Hong did not explicitly say the size of the third extra budget but said the size will be “significant.”

“There will be a demand to support an economic recovery after COVID-19 containment measures,” Hong said.

Details of the third extra budget will be announced in early June, when the ministry sets its second-half economic policies, Hong said.

The KDB may set up a credit facility to buy their bonds and the facility could be funded by loans from the Bank of Korea, officials said.

South Korea unveiled rescue packages worth 150 trillion won to help ease the economic impact of the virus and Wednesday’s measures brought the size of the aid packages to 240 trillion won, according to the ministry.

Moon’s order came less than a week after the ministry unveiled a second extra budget of 7.6 trillion won to give shopping coupons and gift certificates to households to help cushion the economic fallout from the pandemic.

“As the economic shocks on the real economy are more visible, the current measures have a limit in addressing concerns over the pandemic,” the ministry said in a statement. 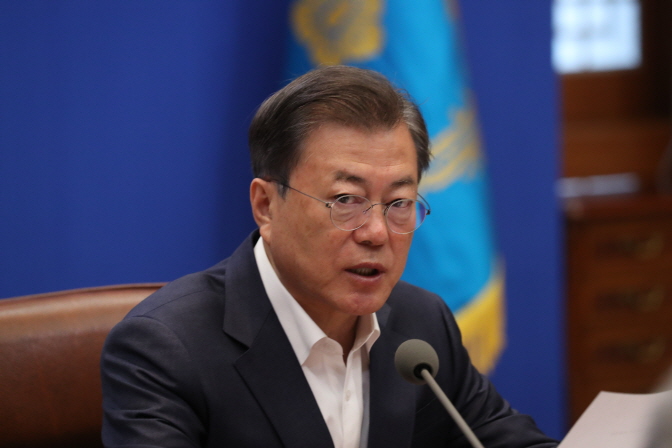 To protect jobs, the government will set up another fund of 10 trillion won to sharply increase subsidies.

About 930,000 temporary or freelance workers who recently lost jobs will receive a subsidy of 500,000 won for three months, the government said.

The ministry voiced concerns about the job market, saying that the impact on jobs will be bigger than previous crises because the coronavirus crisis disrupted both global supply chains and consumer demand.

Starting next week, Finance Minister Hong Nam-ki will hold a weekly meeting of top economic policymakers to better cope with the impact of the coronavirus on the Korean economy, the ministry said.

South Korea’s exports sank 27 percent on year in the first 20 days of April to $21.7 billion amid the shock from the coronavirus pandemic. The daily average exports during the 20-day period also slipped 16.8 percent on-year.

South Korea reported its first on-year job loss since 2009 in March as the coronavirus pandemic began inflicting damage on the job market.

The nation lost about 195,000 jobs last month, marking the sharpest monthly decline since May 2009.

The number of employed people who took temporary leave surged by 1.23 million to 1.6 million in April, marking the sharpest rise since 1983, when the statistics agency began compiling the data.

The International Monetary Fund has predicted that South Korea’s economy will shrink 1.2 percent this year as the global economy is expected to hit its worst year since the Great Depression of the 1930s due to the pandemic.

The world economy is expected to contract 3 percent this year, the IMF said.