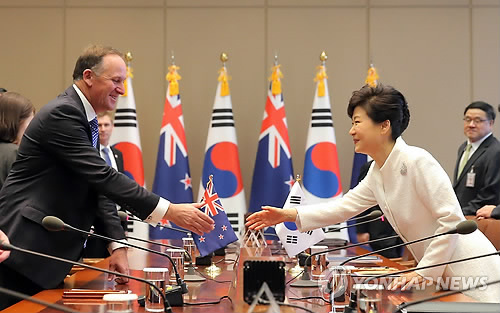 The signing ceremony — a centerpiece of Key’s visit to Seoul — comes four months after the two countries announced they had struck a free trade agreement to boost bilateral trade and economic cooperation. (image: Yonhap)

SEOUL, March 23 (Korea Bizwire) – South Korea formally signed a free trade agreement with New Zealand on Monday, the latest in a series of deals Seoul has inked to boost the country’s exports.

South Korean President Park Geun-hye and New Zealand Prime Minister John Key observed the signing of a deal after their summit talks at the presidential office.

The signing ceremony — a centerpiece of Key’s visit to Seoul — comes four months after the two countries announced they had struck a free trade agreement to boost bilateral trade and economic cooperation.

Park described the formal signing of the free trade agreement as a milestone in bilateral relations.

Park expressed hope that the signing of the free trade deal “will further strengthen mutual confidence and expand the width and depth of cooperation.” Park made the comment at the summit.

The two sides agreed to exclude rice, a key staple food for Koreans, and other sensitive agricultural produce, including apples and garlic, from the deal.

New Zealand is South Korea’s 40th-largest trading partner. Bilateral trade between the countries totaled US$3.2 billion last year, up from $2.8 billion in 2013.

The deal is subject to parliamentary ratification in both capitals before it can take effect.

The deal brought to 13 the number of free trade agreements that South Korea has signed in recent years to boost exports, which account for about half of its gross domestic product.

Key countries with which South Korea enforces free trade agreements include the United States and the European Union.