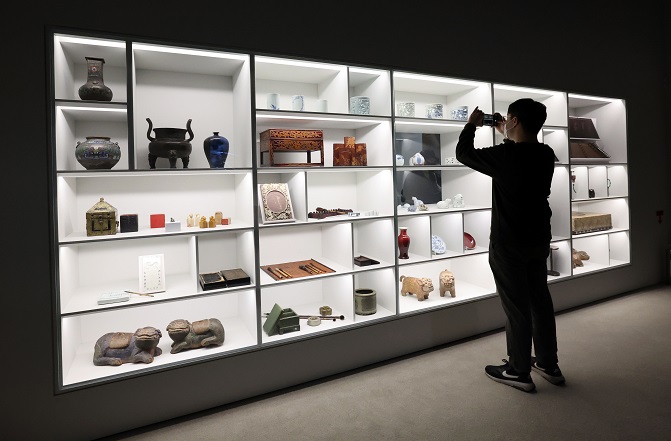 An array of antiques collected by late Samsung chairman Lee Kun-hee are on display at the National Museum of Korea for the exhibit, titled “A Collector’s Invitation,” on April 28, 2022. (Yonhap)

SEOUL, Aug. 11 (Korea Bizwire) — The National Museum of Korea (NMK) said Thursday it will step up efforts to support foreign museums with an exhibition hall dedicated to Korea as the global boom of Korean pop music and TV series has increased demand for learning about the country.

Yoon Sung-yong, director general of the museum, said the museum will newly support six museums, located in North America, Europe and Southeast Asia, in various ways and open a Korean exhibition hall at Thailand’s national museum in Bangkok as part of its work plans for this year.

“We’re running 68 Korean exhibition rooms in 23 countries around the world. But most of them are located in North America and Europe, while the share in Southeast Asia, a region geographically closer, is relatively small,” Yoon said during the news conference at the museum in central Seoul.

It marked his first press event since he took office last month.

Museum officials expect the opening of the new Korean exhibition room at the Bangkok museum will serve as a chance to enhance the Southeast Asian people’s understanding of Korean history and culture.

“We’ll continue our efforts to create and improve Korean exhibition halls in major museums around the world so the ‘hallyu’ boom can spill over to the traditional Korean culture,” Yoon said.

He said discussions are also under way to have overseas museums display artworks donated by late Samsung Chairman Lee Kun-hee as they have shown interest in them.

“The Art Institute of Chicago is preparing to hold a large-scale exhibition of the artworks around early 2026, while the Metropolitan Museum of Art in New York City plans to display them in a smaller scale at its Korean exhibition room in 2025,” Yoon Sang-deok, a top official in charge of exhibitions at NMK, said.

Details of the exhibitions are still under discussion, he added. 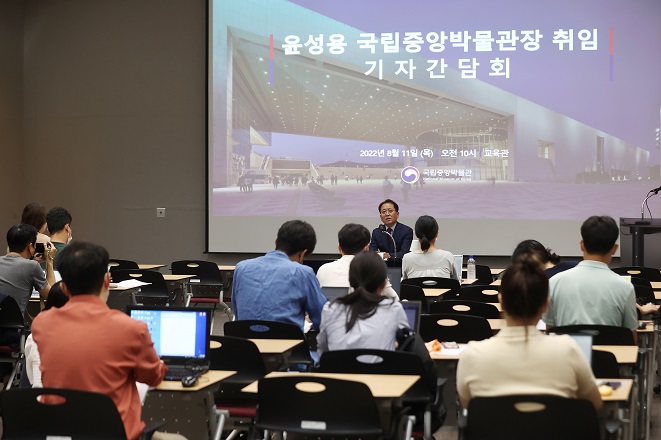 Yoon Sung-yong, director general of the National Museum of Korea, speaks during a press conference at the museum in central Seoul on Aug. 11, 2022. (Yonhap)

The NMK has 21,613 of the 23,000 artworks donated by the Lee family following his death in October 2020. They include masterpieces by Korean and Western artists, including Kim Whan-ki, Claude Monet and Salvador Dali.

The rest went to the National Museum of Modern and Contemporary Art (MMCA) and five art museums run by local governments.

Yoon also unveiled a plan to renovate the NMK’s permanent exhibition hall dedicated to celadon ceramics from the Goryeo Dynasty (918-1392) this year.

The facelift will begin soon as part of the ongoing project to reform the facility’s sculpture and crafts section that began in 2021.

“We’re going to display Goryeo celadon ceramics in a new way in order to make the exhibition room a destination as popular as the Room of Quiet Contemplation, which we created last year,” he said.

The permanent exhibition, where only two famous gilt-bronze “Pensive Bodhisattva” Buddhist statues from the sixth and seventh centuries, respectively, are on display in a minimalist way, is now one of the most popular destinations among museumgoers in the country.