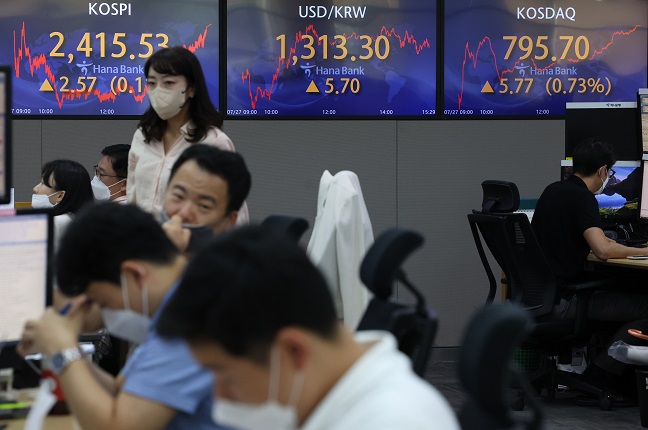 SEOUL, July 28 (Korea Bizwire) — South Korea’s financial regulator said Thursday it plans to take stern actions against illegal stock short selling and seek to confiscate profits that were made by such practices.

The measures were announced as some retail investors called for a ban on short selling amid a fall in stock prices and several securities firms were fined for violating related rules.

Short selling is a trading technique in which investors sell stocks they borrowed in expectations that share prices will fall. When the prices decline, they can make profits by buying back the stocks at lower prices.

Kim Joo-hyun, chairman of the Financial Services Commission (FSC), held a meeting to discuss ways to root out illegal short selling with officials from the prosecution, the financial watchdog and the bourse operator.

The government decided to step up efforts to better detect illegal short selling practices and strengthen punishment for violators.

“It is necessary to root out illegal activities involving short selling in a bid to regain trust in the capital market,” Kim said at the meeting.

Short selling, a globally used risk-hedging strategy, plays a positive role in providing liquidity to markets and preventing price bubble creation. But it can also amplify market volatility and be exploited as a means of price manipulation.

Many retail investors here have called for a ban on short selling, claiming the trading technique caused stock prices to fall. South Korea’s benchmark stock index has dropped about 20 percent so far this year.

They also said short selling prevents a level playing field from being created against institutional investors.

The Korea Investment & Securities Co. was fined 1 billion won (US$766,810) in February as it did not specify the short selling of some 150 million stocks, including shares in Samsung Electronics, over the past three years.