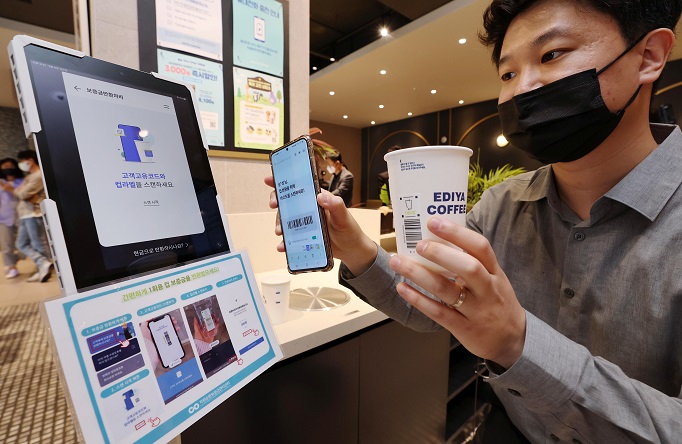 An environment ministry official demonstrates the disposable cup deposit system at a cafe in Seoul on May 6, 2022. (Pool photo) (Yonhap)

SEOUL, May 21 (Korea Bizwire) — The government has postponed the launch of a disposable cup deposit system by six months to December in the face of opposition from business owners and the conservative ruling party.

The environment ministry had planned to implement the new policy on June 10, mandating consumers to pay a 300 won deposit when they buy a drink in a single-use cup. They can get the money back when they return the used cup.

“We will grant a grace period considering that small and midsized businesses suffering from slowdowns due to COVID-19 need time to recover,” the environment ministry said Friday.

Owners of cafes and fast-food outlets have complained the compulsory deposit return system would increase their costs and workload.

The ministry said that during the six-month grace period, it will come up with measures to ease the possible burdens on them.

The government is considering conducting pilot projects in limited regions and outlets before a full-fledged implementation, as recently proposed by franchise owners, officials said.

The ministry made the announcement after a meeting earlier in the day with members of major food and beverage chains. It was the second such talks following the first one held Tuesday.

The policy was initiated with a June 2020 revision of the act on resources saving and recycling, which set its implementation for June 10, 2022.

The ministry had planned to first apply the system to large franchise brands with 100 or more outlets. About 38,000 cafes and fast-food joints of 105 chains would be initially subject to the scheme.

The ministry made a preannouncement for a public review in late February and held an event to demonstrate the system in Seoul early this month.

The government also prepared a set of standards for single-use containers for effective collection and recycling.