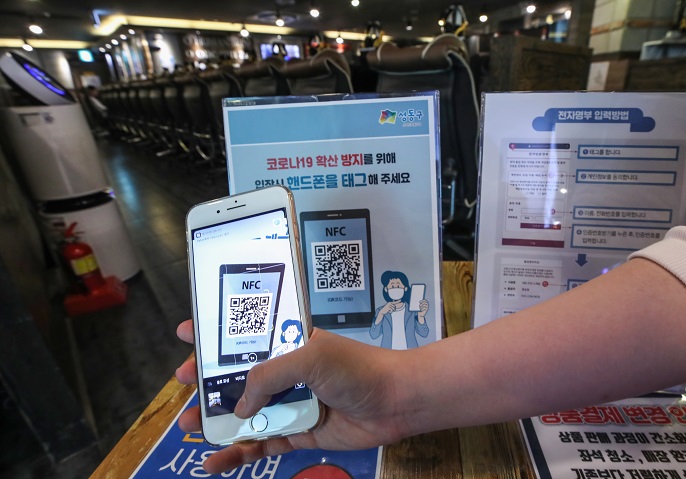 An employee at an internet cafe in Seoul demonstrates the scanning of a patron’s quick response (QR) code on June 1, 2020. (Yonhap)

Under the plan, the government will check the digital entry registers at 17 facilities in Seoul, Incheon and Daejeon through Sunday before expanding the system across the country.

Visitors to the facilities have to get a one-time QR code via smartphone apps and submit it to the venue. The venue manager would then scan the code and include it in a digital customer register.

If a group infection occurs, health authorities would match the digital entry log stored at the Social Security Intelligence Service with individual QR code data provided by the app operator to track visitors at the specific facility.

All information will be stored for up to four weeks.

The facilities and business establishments that run the pilot program included risky venues, such as karaoke facilities, nightclubs and bars. Also included were libraries, restaurants and a hospital.

The government had originally planned to conduct the test in 19 facilities, but two dropped out during the training session.

The test started from 7 p.m. Monday.

Starting June 10, the government plans to launch the system at high-risk facilities, which include bars, nightclubs, karaoke facilities, standing concert halls and indoor gyms that run group exercises, like Zumba and spinning.

QR code-based entry logs have emerged as a tool to better track and contain possible infections after thousands of names on entry logs at nightclubs in the Seoul neighborhood of Itaewon turned out to be inaccurate.

Health authorities and city officials had to rely on closed-circuit television footage, mobile access records and credit card transactions to identify visitors who were not reachable through the phone numbers they left on the paper registers.

Some 270 infections have been linked to the Itaewon cluster so far, including scores traced to an Incheon clubber who lied about visiting the area and carried on with his teaching jobs at a cram school in the port city.