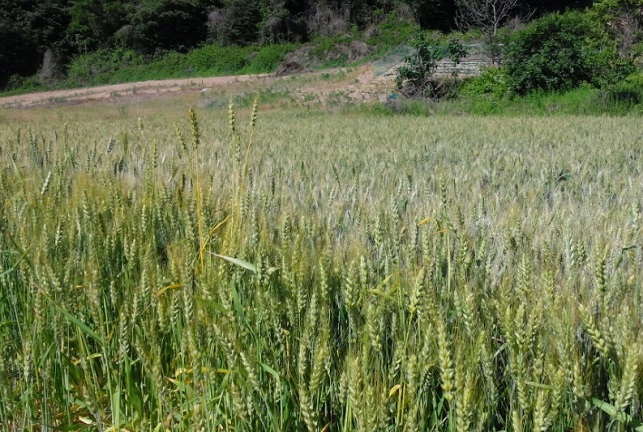 Shown in this undated file photo provided by South Chungcheong Province is a wheat field.

SEOUL, Sept. 16 (Korea Bizwire) — South Korea unveiled its new blueprint for the agricultural industry, which centers on expanding its self-sufficiency of major grains while cutting emissions of carbon from local farms.

“The disruption to global shipping amid the COVID-19 pandemic has shed light on the importance of food security,” the Ministry of Agriculture, Food and Rural Affairs said in a statement.

“Through the blueprint, South Korea plans to seek sustainable development in the agricultural sector.”

Under the target, South Korea plans to increase the self-sufficiency rate of wheat to 5 percent by 2025, significantly up from just 0.7 percent tallied in 2019. The rate for beans will rise to 33 percent from 26.7 percent over the period as well.

South Korea’s overall food self-sufficiency, meanwhile, came to 45.8 percent in 2019. The country was able to produce 92 percent of its demand for rice locally but depended heavily on the United States, China, Australia and Brazil for the supply of other key food items.

The amount of reserved wheat will grow more than fourfold over the period to 14,000 tons, it added.

In line with South Korea’s goal to go carbon neutral by 2050, the combined amount of carbon generated from the agricultural industry will reach 19 million tons by 2030, down from 20 million tons estimated in 2018.

To meet the target, South Korea will induce local farms to use renewable energy sources and decrease the amount of chemical fertilizer to around 233 kilograms per hectare by 2025, down from 266 kilograms estimated in 2020.