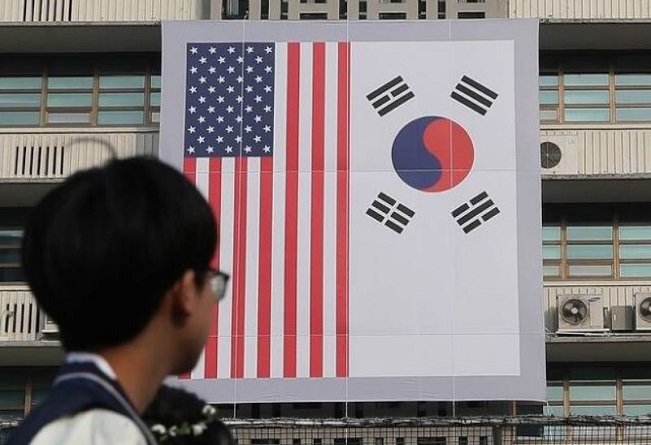 This file photo shows the U.S. flag and South Korean flag at the U.S. Embassy in Seoul. (Yonhap)

SEOUL, May 4 (Korea Bizwire) — A substantial share of South Koreans think that the nation’s relationship with the United States is more important than that with China, a survey showed Monday.

The Federation of Korea Industries conducted a survey of 1,010 South Koreans over 20 years of age.

Koreans’ favorable perception about the U.S. scored 6.8 points on a scale of 10, about two times higher than that for China (3.5 points).

The FKI explained that the survey showed that Koreans still have more friendly feelings towards the U.S. rather than China.

By age, among those in their 20s and 30s, the favorable perception towards the U.S. scored 6.9 and 7 points, respectively, higher than other age groups.

In contrast, their favorable perception towards China scored very low at 2.8 and 2.6 points, respectively.

From a comprehensive viewpoint, 77.7 percent of the respondents said the U.S. is more important than any other country for South Korea. The share of those who selected China remained low at 12.7 percent.

As for the reason why respondents thought the U.S. is more important than China, 41.4 percent picked “shared values, i.e. free democracy and market economy,” followed by “important security ally for peace on the Korean peninsula” at 35.9 percent and “the need to strengthen cooperation with the world’s largest economy” at 16.2 percent.