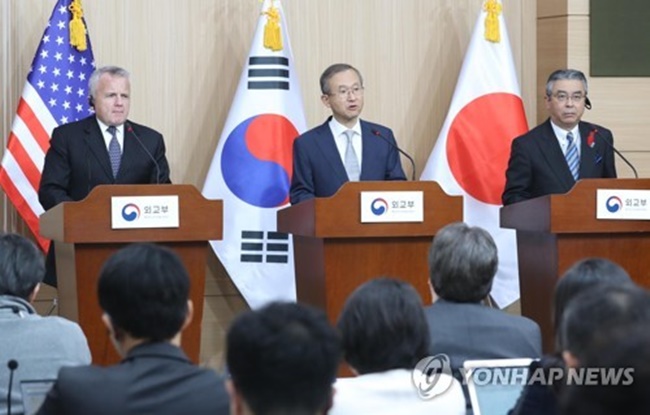 “We shared our assessments of the current situation and reaffirmed our push for a complete dismantlement of the North’s nuclear program through peaceful methods,” Lim told reporters in a joint press conference.

“We also agreed to make all possible diplomatic efforts, including sanctions and dialogue, through close coordination among the three countries.”

“In particular, the three countries held the same view that it is essential to stably manage the situation on the Korean Peninsula, while at the same time keeping pressure on the North to resolve its nuclear problem,” he added.

Sullivan echoed Lim’s comments, emphasizing that the U.S. is “dedicated” to diplomacy in resolving the North’s nuclear issue and that its aim is toeventually bring the North to the negotiating table.

“Our objective is, through the campaign of pressure, to bring North Korea to the negotiating table without preconditions so that we can achieve our objective of a denuclearized Korean Peninsula,” he noted.

Sullivan said that the U.S. will continue its efforts to press the North togive up its nuclear weapons development aspirations but it should be prepared to respond to any circumstances given that the North is “unpredictable” and “not transparent.”

“We will continue those efforts to press the regime to stop its unlawful behavior, stop the weapons tests, stop the missile tests. We are working to denuclearize the Korean Peninsula… however, the regime in Pyongyang is unpredictable and not transparent,” he said.

“We have to be prepared. For that reason, President Trump, Secretary Mattis and Secretary Tillerson said that all options are on the table. Diplomacy is our primary objective… in addressing the threats posed by North Korea. (But) we are prepared to respond to any eventuality,” he added.