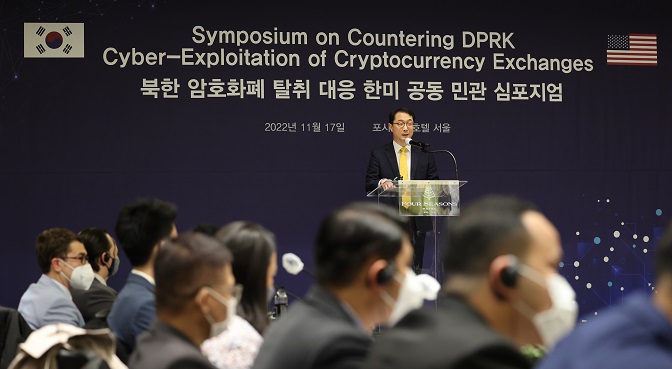 Kim Gunn, Seoul’s special representative for Korean Peninsula peace and security affairs, speaks during a South Korea-U.S. symposium at a Seoul hotel on Nov. 17, 2022, on how to respond to North Korea’s cyber exploitation of cryptocurrency exchanges. (Yonhap)

SEOUL, Nov. 17 (Korea Bizwire) — South Korea and the United States held a joint government-private forum Thursday on how to counter cryptocurrency theft and other illegal cyber activities of North Korea, a presumed main source of Pyongyang’s financing for its missile and nuclear programs.

Co-hosted by the Ministry of Foreign Affairs and the State Department, the Symposium on Countering DPRK Cyber-Exploitation of Cryptocurrency Exchanges held here involved government officials and private-sector experts from the two countries, as well as representatives from cryptocurrency exchanges and blockchain companies from more than a dozen countries, including Malaysia and New Zealand.

DPRK stands for the North’s official name, the Democratic People’s Republic of Korea.

The North is widely suspected of having engaged in cryptocurrency theft to finance its continued and apparently advancing nuclear and missile programs.

In his opening remarks, Kim Gunn, Seoul’s special representative for Korean Peninsula peace and security affairs, said the North is “seeking out malicious cyber activities, including cryptocurrency hacking, as new sources of financing” for its weapons program to bypass international sanctions.

He cited a report by the FBI that hackers associated with the secretive Kim Jong-un regime stole US$620 million in cryptocurrency from a video gaming company earlier this year.

According to a U.N. Security Council report released in April, the North is accused of having stolen as much as $400 million worth of cryptocurrency in 2021.

Jung Pak, Washington’s deputy special representative for Pyongyang, also said cryptocurrency exchanges and block chain companies provided Pyongyang a “lucrative arena to engage in malicious cyber activity” and that the U.S. has taken steps to counter such threats by the North in order to impede its weapons development.