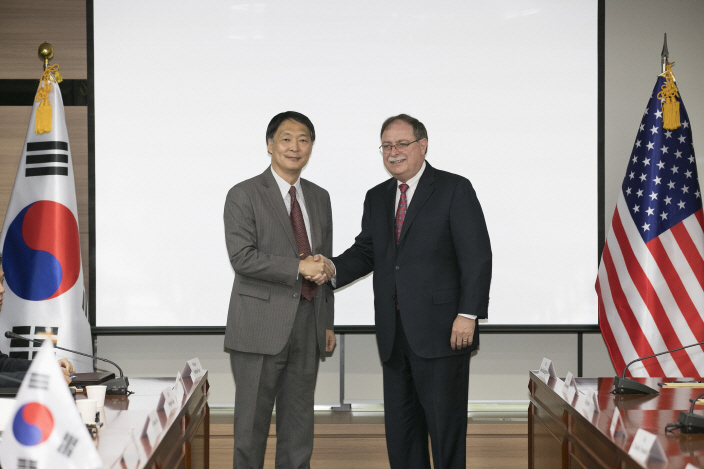 Chang Won-sam (L), South Korea’s negotiator in defense-cost talks with the U.S., shakes hands with his counterpart, Timothy Betts, during the fourth round of bargaining in Seoul on June 26, 2018. (Yonhap)

SEOUL, Feb. 8 (Korea Bizwire) — South Korea and the United States will sign a preliminary deal this weekend on splitting the costs of their military alliance, a diplomatic source in Seoul said Friday.

A signing ceremony will be held in Seoul on Sunday, led by their top negotiators, Chang Won-sam and Timothy Betts, according to the source.

The two sides have recently reached an agreement on the thorny issue following 10 rounds of talks last year.

It clears a hurdle to the allies’ coordination ahead of a second summit between President Donald Trump and North Korean leader Kim Jong-un to take place in Vietnam from Feb. 27-28.

Seoul reportedly plans to increase its contribution to around 1 trillion won (US$890 million) in 2019. The contract would last only one year, leaving a burden for the allies to start negotiating the terms again in the coming months.

Once the new deal is inked, South Korea plans to wrap up related administrative procedures by March for immediate parliamentary approval.

The Trump administration’s agreement with South Korea is widely viewed as setting a major precedent for bargaining with other allies, including Japan.

The U.S. demanded South Korea pay at least $1 billion per year, while Seoul wanted a deal to be valid for three to five years.

South Korea has shared the financial burden for USFK since the early 1990s. The funds are used to cover the wages of South Korean workers at USFK bases, construction and logistical support.