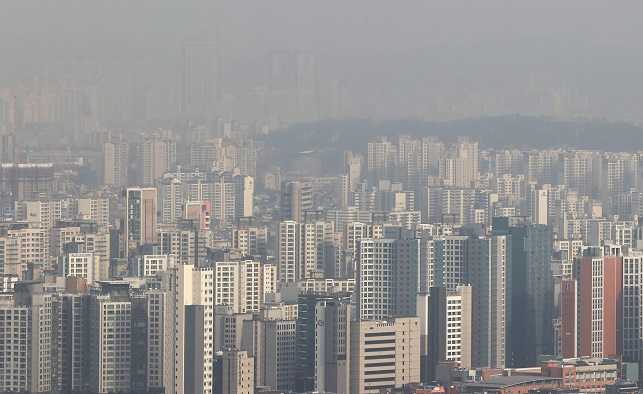 The government unveiled a set of measures to prevent foreigners from illegally buying real estate as some non-residents are found to have taken undue profits from property transactions.

To monitor any illegal money flows, the Bank of Korea (BOK) and the Korea Customs Service will set up an information-sharing system by March next year. The BOK will collect information about foreigners’ purchases of real estate and deliver it to the state customs agency.

The government will also not permit foreigners who came to South Korea to study or with short-term stay visas to engage in the property rental business.

The number of property transactions by foreigners came to 16,405 in the January-September period, up from 15,727 reported for all of 2020, according to the Korea Real Estate Board.

The reading marked the largest since 2006 when the agency began compiling related data.

The government has imposed heavier regulations on real estate deals for Korean nationals, including tighter rules on home-backed loans and tax hikes. But foreigners have been mostly unaffected by such regulations due to lax supervision.

Hong said the government is considering easing taxes on real estate possession for middle class people who own one home amid growing public discontent ahead of the presidential election next year.

But Hong made it clear that the country has no plan to delay the heavier taxation on capital gains from property sales for owners of multiple homes in a thinly veiled attack against Lee Jae-myung, the presidential candidate of the ruling Democratic Party.

“There is no plan to change the taxation plan (for owners of multiple homes) in a bid to stabilize the housing market, pursue the policy in a consistent manner and promote taxation fairness,” Hong said.

Lee has proposed the temporary easing of property-related capital gains taxes on owners of multiple homes, claiming the move will help ease a home supply shortage.

The government imposed heavier property tax burdens on such owners in some designated areas as it sharply hiked the capital gains tax rate on home sales for such people in June after a one-year grace period.

The government has unveiled a set of measures to curb housing prices, including tax hikes and tighter lending rules. Public discontent about the housing policy has mounted amid growing tax burdens.