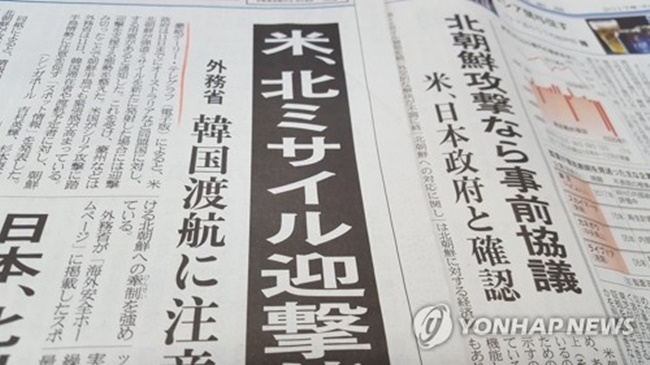 A Japanese newspaper’s report on the possibility of U.S. attack on North Korea. (Image: Yonhap)

SEOUL, April 18 (Korea Bizwire) – South Korea’s foreign ministry on Tuesday called on Japan to refrain from fanning security concerns on the Korean Peninsula, one day after Prime Minister Shinzo Abe mentioned a contingency plan in the event of a conflict in Korea.

In a parliamentary committee session on Monday, Abe said his government is working on contingency plans for a crisis situation on the peninsula, referring to a potential influx of Korean refugees into Japan.

“We are envisioning a series of measures, consisting of landing procedures for refugees after they are picked up, the construction and operation of shelters and screenings to determine whether or not we should give them asylum,” Japan’s Kyodo News quoted Abe as saying in the meeting.

He also said the government is looking into whether preparation measures on the evacuation of Japanese nationals from South Korea would be necessary in the event of a crisis.

“We are aware of the press report,” Cho June-hyuck, spokesman at South Korea’s Ministry of Foreign Affairs, said in a press briefing, upon being asked about Abe’s remarks.

“We think that there’s a need to refrain from making remarks that could cause misunderstandings by supposing a hypothetical situation with regard to the latest condition of the Korean Peninsula or that could negatively impact the peace and security of the peninsula,” Cho said.

South Korea has recently witnessed a surge of mobile messenger-circulated rumors about a war with North Korea in April, a phenomenon which followed talk of the United States’ potential pre-emptive strike on the communist regime.

South Korean officials repeatedly dismissed the rumors as “groundless” and said any U.S. action on the peninsula will only be taken after consultations with Seoul.

Even before the rumors of a crisis emerged, Japan has been generally interested in the issue of a Japanese evacuation in the event of an emergency in South Korea, Cho said, indicating that Abe’s remarks do not particularly refer to the current security condition here.