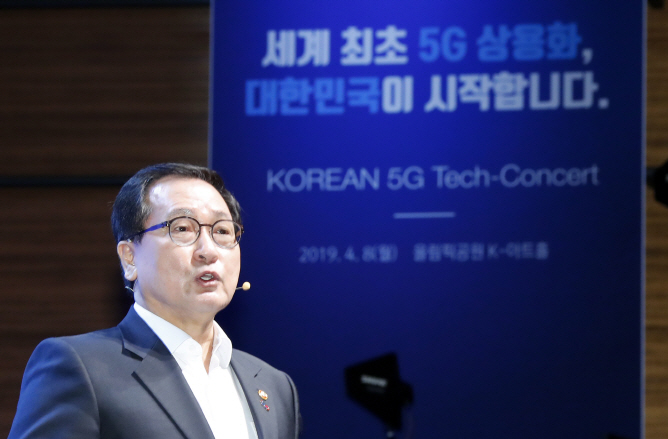 SEOUL, Apr. 8 (Korea Bizwire) — The South Korean government vowed Monday to develop 5G as the key platform for the fourth industrial revolution as the next-generation wireless technology promises advanced connectivity for a wide range of industries and services.

The Ministry of Science and ICT said it has designated a number of information and technology sectors as the “strategic 5G” industries with potential to propel growth in high-tech areas, including smart factories, autonomous driving, smartphones, robots and drones.

“The government and industry will work together to get ahead of the 5G market and create meaningful changes that can change people’s lives,” ICT Minister Yoo Young-min said in an event celebrating South Korea’s commercial 5G rollout at Olympic Park in southern Seoul.

The ceremony was attended by President Moon Jae-in, the CEOs of SK Telecom Co. KT Corp. and LG Uplus Corp, and about 300 government, industry officials and experts in the field.

The government vowed to collaborate with the industry to develop five key services based on the new wireless standard, including immersive content, smart factory, autonomous driving, smart city and digital health care, by 2025.

For the autonomous driving, the government will operate self-driving shuttles in selected cities by 2020 and provide about 1,000 5G-enabled buses to provincial governments by 2025.

The adoption of 5G is expected to allow the self-driving car to receive essential traffic information in real time, increasing traffic safety and reducing response time.

It plans to establish 5G innovation centers in Seoul and Pangyo, a thriving tech-hub south of Seoul, by 2021 to facilitate collaboration between large enterprises and startups.

It plans to provide tax breaks for telecom companies to speed up the establishment of 5G nationwide and provide subsidies to small and medium-sized companies when they adopt smart factory solutions.

To handle a rise in mobile traffic, the ministry will expand the 5G spectrum bands and cut red tape in building new base stations.

“Being the first (in 5G) doesn’t necessarily mean being the best,” Yoo said in a meeting with CEOs of the carriers after the event. “I hope telecom companies will come up with a profitable service model and speed up the establishment of the network beyond the Seoul metropolitan area.”

The 5G services will be available in heavily populated spots in the Seoul metropolitan area and other major cities for now because the carriers are planning to complete building network stations for 5G in 85 cities by the end of this year.

Telecom operators say their 5G technology will enable networks to handle far larger volumes of data with very low latency, which smoothes the way for everything from streaming 4K videos to autonomous driving and precise remote control of robots in factories.

Samsung says its Galaxy S10 5G will enable users to access unprecedented speeds — up to 20 times faster than 4G — changing the worlds of gaming, media and other entertainment on the handheld devices.