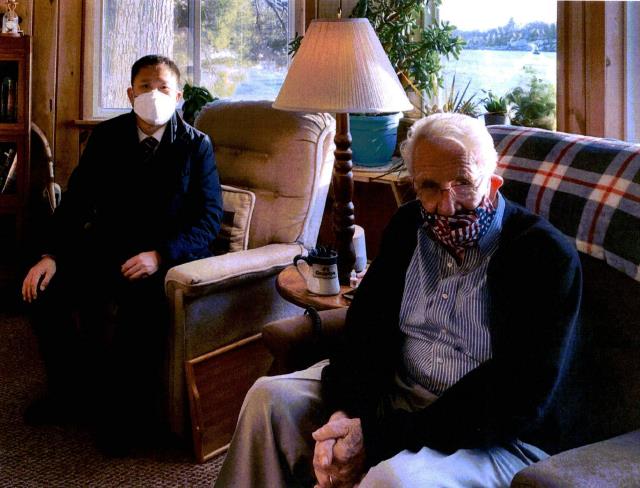 This undated photo provided by South Korea’s veterans affairs ministry on Feb. 10, 2021, shows Merl Smith (R), a Korean War veteran, posing for a picture during a meeting with a South Korean government official who provided face masks as a token of gratitude for his sacrifice during the 1950-53 war.

SEOUL, Feb. 15 (Korea Bizwire) — South Korea provided an additional 2 million face masks to international veterans of the 1950-53 Korean War recently in an expression of gratitude for their sacrifice, the veterans affairs ministry has said.

Under the second such project, a total of 1 million masks were sent to the veterans in the United States, and the remainder to 21 other participating nations, including Canada, Britain, Columbia and South Africa, according to the ministry.

Their shipments began in mid-December and were completed recently, it added.

In addition, the ministry also sent around 30,000 face masks to 550 independence fighters and their family members living overseas to thank them for their role in the country’s liberation from the 1910-45 Japanese colonial rule.

In May last year, the Seoul government provided 1 million masks to the international veterans for the first time to help fight the COVID-19 pandemic.

“We’ve received many thank-you notes from the foreign veterans and government officials,” a ministry official said. “We will continue to launch diverse projects to repay veterans.”