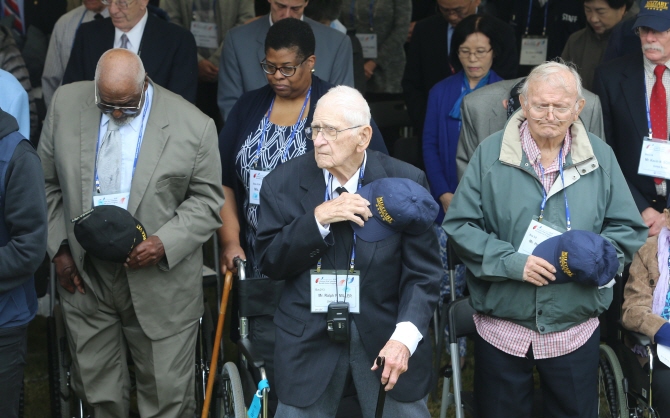 Foreign Korean War veterans attend a ceremony to mark the 74th U.N. Day at the U.N. Memorial Park in the southeastern port city of Busan on Oct. 24, 2019. (Yonhap)

SEOUL, May 7 (Korea Bizwire) — South Korea will provide a total of one million face masks to Korean War veterans in 22 countries in an expression of gratitude for their sacrifice, as this year marks the 70th anniversary of the 1950-53 conflict, the veterans affairs ministry said Thursday.

Around 1.95 million people from 22 countries, including the United States, Britain, Canada and Turkey, took part in the three-year war, including six countries that extended medical support.

“All the 22 countries have been struggling with the COVID-19 virus, and providing face masks is an urgent matter as the war veterans are susceptible to the virus,” the Ministry of Patriots and Veterans Affairs (MPVA) said in a release. The veterans’ average age is 88.

Of the total, 500,000 masks will be sent to the U.S. and the remainder will be distributed to the other 21 nations, with the exact figures for each nation to be decided upon the respective number of the veterans and their coronavirus situation, according to the ministry.

An Air Force aircraft will take off Friday to transport the masks to the U.S. while the other countries will be able to receive the supplies from South Korea’s overseas missions within this month, officials said.

Currently, South Korea imposes export restrictions on protective masks, but outbound shipments for humanitarian purposes are allowed as an exemption, the ministry said.

It was one of many projects that South Korean has been pushing for as part of efforts to return the favor it received 70 years ago.

Related ministries cooperated for the mask supply project, including the prime minister’s office, the foreign ministry, the food and drug administration and the trade ministry, according to the MPVA.

“When the coronavirus situation in South Korea stabilizes more and South Koreans can buy masks without any difficulties, we will review additional support for the veterans,” the ministry said.

The war ended in a truce, not a peace treaty.