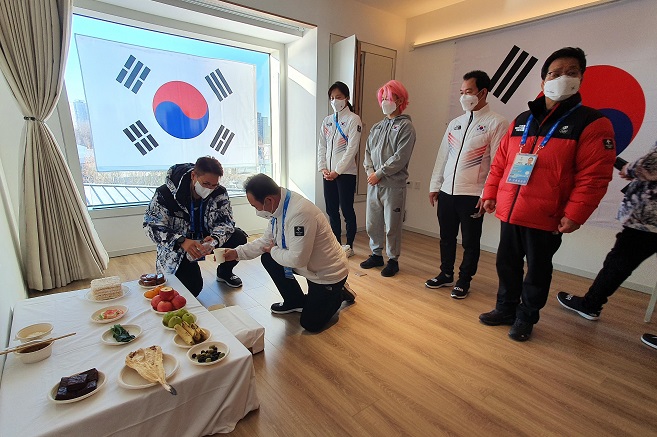 Yoon Hong-geun (C, kneeling), head of the South Korean athletic delegation to the 2022 Beijing Winter Olympics participates in a traditional celebration of the Lunar New Year’s Day at the athletes’ village in Beijing on Feb. 1, 2022, in this photo provided by the Korean Sport & Olympic Committee.

BEIJING, Feb. 1 (Korea Bizwire) — South Korean athletes and officials in Beijing for the upcoming Winter Games celebrated the Lunar New Year on Tuesday in an understated event at their Olympic village.

Though Jan. 1 on the Lunar Calendar is one of South Korea’s biggest holidays, the Korean Sport & Olympic Committee (KSOC) only organized a small celebration at the athletes’ living quarters, mindful of the risks of the coronavirus and athletes’ preparation for the quadrennial competition.

The KSOC said short track speed skaters Kwak Yoon-gy and Kim A-lang were the only two athletes on hand, joined by Yoon Hong-geun, head of the athletic delegation, You In-tak, deputy head of the delegation, and Lee Young-seok, the women’s short track coach.

Kwak and Kim will also be the flag bearers at the opening ceremony on Friday.

Training sessions and preliminary action are scheduled in the days leading up to it. The competition will close on Feb. 20.

They have all been placed into a bubble, formally called “closed loop,” as part of countermeasures to combat the spread of COVID-19.